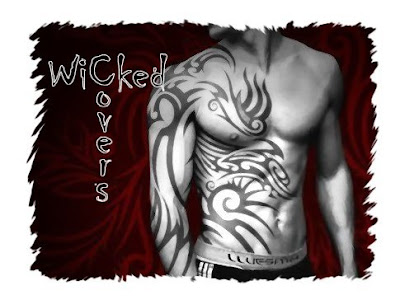 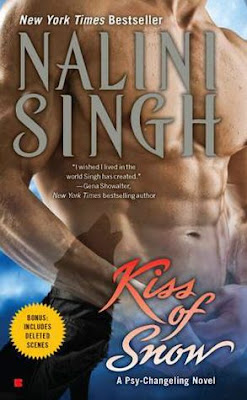 Since the moment of her defection from the PsyNet and into the SnowDancer wolf pack, Sienna Lauren has had one weakness. Hawke. Alpha and dangerous, he compels her to madness.

Hawke is used to walking alone, having lost the woman who would've been his mate long ago. But Sienna fascinates the primal heart of him, even as he tells himself she is far too young to handle the wild fury of the wolf.

Then Sienna changes the rules and suddenly, there is no more distance, only the most intimate of battles between two people who were never meant to meet. Yet as they strip away each other's secrets in a storm of raw emotion, they must also ready themselves for a far more vicious fight…

A deadly enemy is out to destroy SnowDancer, striking at everything they hold dear, but it is Sienna's darkest secret that may yet savage the pack that is her home…and the alpha who is its heartbeat…

I think this is the sexiest cover  I have ever seen.  I love how it has just the hero Hawke shirtless with the blend of his wolf.  Hawke is the alpha wolf of his pack the SnowDancers.  The cover shows a very powerful hero.  It is a great love story for 2nd chances at love.

I waited for ever for Hawke and Sienna to have their own story and it did not disappoint.  Sienna is a stubborn psy that never gives Hawke a break.   Poor Hawke has to hold his emotions for Sienna because he has already lost his mate and should not have feelings for Sienna. He is so Alpha but yet gentle and caring when it comes to Sienna.  He wants to protect her, but has to be hard so she will be a strong soldier for the SnowDancers. He is also gentle and caring by making sure she is okay from an incident she has with a SnowDancer.

"Where else are you hurt?"

His fingers tightened on her jaw. "Where else are you hurt?"

"You didn't ask Maria." Stubborn will in every word.

"Maria is a wolf, able to take a few times the damage of a Psy female and keep going." Which was the reason Sienna had been ordered not to get into physical confrontations with the wolves. That and the fact that she didn't have her lethal abilities under total control. "Either you answer the question, or I swear to God I really will put you in the pen." It would be the most humiliating of experiences and she knew it, every muscle in her body taut  with viciously withheld anger.

"Bruised ribs," she gritted out at last, "bruised abdomen, wrenched shoulder. Nothing's broken. It should all heal within the next week."

Dropping his grip on her chin, he said, "Hold out your arms."

The wolf growled, loud enough that she flinched. "Sienna, I've given you a long leash since you came into the pack, but that ends today." Insubordination from a juvenile could be punished and forgiven. In an adult, in a soldier, it was far more serious matter. Sienna was nineteen going on twenty, a ranked novice-letting her actions slide wasn't even an option. "Hold out your fucking arms."

Just think this is just a teaser three pages into the story. It only gets better...hotter...and sexier.
Posted by JoLee @ Wickedly Delicious Book Blog
Email ThisBlogThis!Share to TwitterShare to FacebookShare to Pinterest
Labels: Nalini Singh, Paranormal Romance, Wicked Cover