This week Teaser Tues.. is Deacon's Touch by Callie Croix. Wow the bar scene is yummy. Deacon (AKA Deke) is one sexy Cowboy that is Dominate in bed and a sweetheart outside of the bedroom. 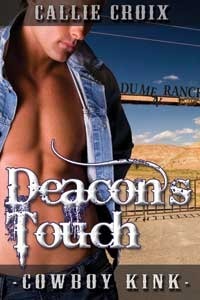 Ex-Air Force Pararescueman Deke Dumen doesn’t know what to make of the sexy yet reserved brunette who breaks through the walls he built after an injury ended his career and a divorce soured him on relationships. As a guest at his family's ranch Jessie is off limits, but the Dom in him rebels at the restriction, even as he realizes his penchant for control in the bedroom would likely scare the holy hell out of her. When Jessie shocks Deke by asking for exactly what he's been craving, he's ready to break the rules and introduce her to his own brand of dominance. Her willing surrender rocks them both to the core. But once the weekend's over, they must decide if it was just a wild fling or the start of something more.
~~~~~~~~~~~~~~~~~~~~~~~~~~~~~~~~~~~~~~~~~~~~~~~~~~~~~

"Why should I stay away  from you?"

In answer, he set down his beer and moved in close, caging her between him and the bar as he set his hands on either side of her. His gaze raked over her face, down to her cleavage exposed by her filmy blouse before coming back to her eyes and holding there. The naked lust raging in his eyes made her mouth go dry as he bent his head until his lips hovered inches from hers. "Because I like control."