OMG!! The Cover to Consumed (Dark Protector Series #4) by Rebecca Zanetti Web is finally out.  Thank you to Tea and Book for posting this. Love the new cover. WOW it is hot!  Different from the others in the series. I can not wait for Jordan and Kate Story. Release date is July 2012. 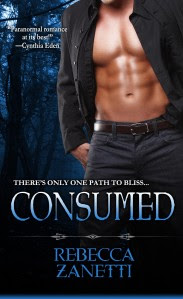 He held her up against the wall.

Focus.  She needed to focus.  Was this really happening?  Her fantasies didn’t come close to this heat—to this need.  The breath caught in her throat and she held still.  So still maybe he wouldn’t stop.  Maybe he’d finally kiss her.  “Jordan.”

Even so, he settled deeper into the vee between her legs.

Nothing in the world would make her look away.  She held his gaze, mesmerized by the multitude of colors combining into topaz.  “I’m a big girl.”  They’d never be able to mate.  She knew that.  The man ruled the entire feline world—he couldn’t mate with an infected lioness unable to shift.  With someone who might pass on the genetic mutation.

Resulting freedom caught her unaware.  Pain, too.  But also…freedom with the clear knowledge they’d never go anywhere spread through her like a swarm of hungry bees.  Her chin lifted—along with her thighs.

Throwing challenge into her smile, she clasped her ankles at the small of his back, sliding along the prominent line of his erection.  Her hands clenched his shoulders.  “So.  I’ve been waiting a long time for this.”

“Kate.”  Her name came out more of a groan.  His tongue wet his lips.

Elation mingled with an odd despair inside her to result in determination.  What the hell.  She had nothing to lose.  “You want me, Jordan.”  Proof of his desire pulsed against her, even through her jeans.  Every ounce of strength she had went into keeping the amazement off her face.  He actually wanted her.  “There’s no way we can go back to living near each other—not going to work.”

His gaze dropped to her lips.  One broad hand threaded through her hair, tangling at the nape.  “I’m dropping you off—going to fight.”

The words were simple, the tone final.  A goodbye of sorts?  “You’ve fought before.”  Panic bit her words off.  It would be just like Jordan to squire her to safety if he were about to fight to the death.  To get his affairs in order.  What wasn’t he telling her?  She began to struggle.

“Ah, Kate.”  Sadness filtered through his amazing eyes.  His hold tightened.  Regret and inevitability exhaled on his sigh.  Better than any dream, his head lowered toward hers.

Then his lips found hers, and she forgot all about sadness and dreams.

Fire, promise, despair, all comingled in his kiss, his lips firm, his tongue gentle.  So much softness.  The shoulders under her hands went rigid with restraint, a vibration of control as he kept himself in check.

Slowly, too damn slowly, he halted the kiss, levering back.   Desire and apology cut hard lines into his face.

Swift as the cat she’d once been, she clutched both hands in his thick hair, yanking his mouth back down.  Wild, nearly desperate, she slid her tongue inside, pressing her entire body along his length.  Demand had her rubbing against him, need had her taking what she wanted.  What she needed.

For almost two seconds, he held back.