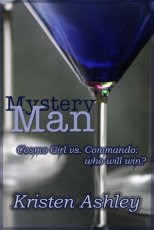 Blurb:
While drinking cosmopolitans, Gwendolyn Kidd meets the man of her dreams. Then she takes him home. Then she wakes up alone. But her fear that she lost her dream man turns into a relationship with a mystery man when, night after night in the dead of night, he comes back for more. Hoping it will blossom into something real, she lets him.

But she doesn’t even know his name.

Gwen’s struggling with the decision to end their crazy non-relationship when her sister-from-hell, Ginger’s best friend pays a visit and warns Gwen that if she and her sister don't get smart, they'll both get d-e-a-d, dead. Gwen has no clue what’s going on but she’s used to Ginger’s antics and decides to lay the problem on her sister’s biker boyfriend's doorstep. Bad choice. She hits the Denver Underground radar with a big, loud ping.

Thus begins the head-to-head of the Commando vs. Cosmo Girl as Hawk woos Gwen in his own unique way, Gwen survives firebombs, drive-bys, kidnappings, hot pursuits by biker hotties and gorgeous police detectives and discovers the heartbreaking reason why Hawk kept her at arm’s length.

﻿
I really was not sure how I was going to like Mystery Man because the H/h sleep together for 18 months with out knowing each other or names and the Hero just comes to the Heroine house once or a few times a week to have sex with her and then through out the night leaves. Was a little creep out at the beginning of the book because the Heroine Gwen lets the Hero Cabe "Hawk" Delgado sneak in her house, climbed in her bed and she did not even make a scene. Boy was I so wrong because I loved this booked.

Gwen lives in her head at times and her lover has been her Mystery Man and she was content with that. Well her Mystery Man “Hawk” is now real and in her face because her life is in danger from something her sister did. Well I got more creep out again because Hawk knows everything about Gwen. But later on fall in love with Hawk because why he knew everything about her.

Hawk as been dead inside for 8 years because of a sad incident that happened to him. Because of this he has not been in a serious relationship. He would of wanted a relationship with Gwen but he was giving what she wanted a Mystery man. We get to learn about Hawk and his past little by little through the book. Because of all the danger in Gwen’s life from her sister, their relationship is pretty rocky at times. Gwen will do things that Hawk is not happy about. This is when we really get to know Tack. (can not wait for his story.)

Kristen Ashley writes some of the best epilogues. She is truly the Queen of  Epilogues. Mystery Man epilogue is awesome. Loved it.

The sex scenes were scorching hot, plot was interesting, action was good, relationship was rocky at times where I could not turn my pages fast enough to find out if they were going to have their happy ending and the Hero is a super sexy in your face-Uber Alpha male-biker babe. A great start to a new series. This is a keeper for me.