Cover Revealed: Own The Wind (Chaos #1) by Kristen Ashley

Thank you to Kristen at Swept Away By Romance for having this lovely cover on goodreads!
I am so excited to get back to Chaos Motorcycle Club with some yummy... you-just-want-to-lick-those-delicious-Tattoo, bad ass  biker babes. Look forward to see how Tack will react to his little girl dating. ﻿ 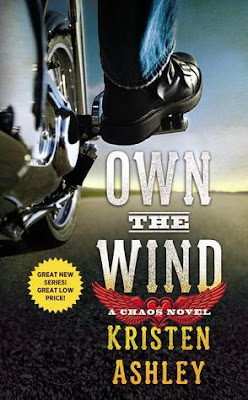 Own the Wind (Chaos #1)
by Kristen Ashley
Release Date: April 12, 2013
E-book
Blurb by Goodreads
Tabitha Allen has a not-so-secret crush on Parker "Shy" Cage. Shy Cage thinks he knows the path Tabby's on and it isn't a good one. So he decides to teach her a lesson to lead her to the right path. Unfortunately, he was wrong and his actions wound Tabby, breaking her heart. It's Tabby who then teaches Shy a lesson about casting judgment and Shy Cage learns what it feels like to be invisible. But when tragedy strikes and Tabby's heart is broken again, Shy does what he can in the background to help. Trying to forget her heartbreak, Tabby finds herself in danger. To keep it secret from her biker family, the Chaos Motorcycle Club, she calls Shy to rescue her. But when she lets him back in, she gets much more than she bargained for.
Posted by JoLee @ Wickedly Delicious Book Blog
Email ThisBlogThis!Share to TwitterShare to FacebookShare to Pinterest
Labels: Contemporary Romance, Cover Revealed, Kristen Ashley