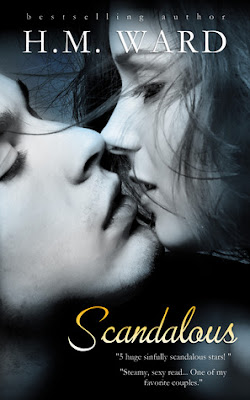 Scandalous (Scandalous #1)
by H.M. Ward
Purchase Links: Amazon
e-book 324 pages
Blurb by Goodreads
"I see it, Jack. Your muse is back. The thing that gave you passion, tormented you, and haunted you is back. You're reeling in ecstasy and dread. It's something you want, but can't ever have. And the one that brings the pain is pure, white as snow... and standing in front of you."

One kiss could have changed Abby's life, but when it didn't happen, she ran. Jack was everything to her and when he didn't respond, Abby couldn't bear it. Everything about that night--leaning in close to his face, feeling the night breeze teasing her hair, the way his scent filled her head--was burned vividly into her mind, including the moment when Jack pulled away. There was no kiss. Abby was wrong. She was wrong about him, wrong about them.

Maybe she didn't have to go to college two thousand miles away, but she did. She had to forget about him. Abby threw herself off the grid, disappearing completely from the life she knew. After completing her undergraduate degree, she enrolled in seminary. All contact with her old life was severed and she never looked back, until she was forced to.

When Abby puts idealism into practice, her congregation throws her out. If she can survive a year on her own, they'll take her back, and continue to pay off her student loans--but if she fails, Abby is on her own with enough debt to fund a small town. Seminary wasn't cheap. With no place left to go, Abby returns to New York and her best friend takes her in.

Desperate to make it on her own and prove she was right, Abby follows a job lead to an art studio on Long Island. It isn't until she hears Jack's voice that she freezes. The hairs on the back of her neck prickle as she turns to see Jack, ten years later, looking even more tempting than before.

Fate is cruel. Abby left this life behind, but she's thrown back into it, head first. It's like someone hit rewind on her life and its ten years earlier. She's the cotton-mouthed girl that she always was around Jack, and now her future relies on the man who rejected her.

Found this sexy cover with an interesting blurb and had many great reviews. To my disappointment Scandalous was 1 star - not good. I do not expect a lot for 99 cents novels but I want to at least like them - 3 stars. The writing style and characters did not grab my attention. I wanted spark or some kind of emotion from Abby especially the first time she sees Jack after 10 years but got nothing. Both characters are flat and boring. More research was needed with the church to at least make it a 2 star - ok novel. I am bummed I could not connect with this story because I do have Two YA novels (a free novel and another 99 cent novel) from H.M. Ward to read this year for my YA reading challenge. I hope I can connect with the characters for those books. As for her adult novels at this time I will not give any others a try.