ARC Review: Forbidden (The World of Nightwalkers #1) by Jacquelyn Frank 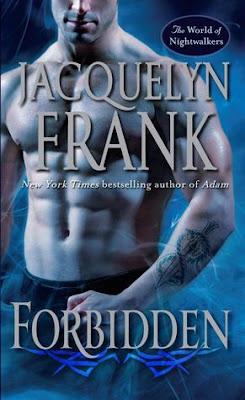 Forbidden (The World of Nightwalkers #1)

by Jacquelyn Frank
Publisher: Ballantine Books
Purchase Links: Amazon Barnes & Noble
E-book 354 pages
Synopsis by Goodreads
From New York Times bestselling author Jacquelyn Frank comes this first book in The World of the Nightwalkers—an exciting and sensual new spin-off series in which the Bodywalkers, an ancient race of the night, battles the evil forces who prey on them.

The unexpected happens in an instant. On her way to work, secretary Docia Waverley hurtles into a crashing crossroads, and she quickly begins to suspect that things will never be the same. Then, when a tall, blond, muscular stranger intervenes on her behalf, telling her it is his duty to protect her at all cost, what is just a feeling turns to proof positive. That is, as long as Docia’s savior doesn’t turn out to be a crazed kidnapper.

When Ram finds Docia, he has no doubt that she is his queen. But as this golden warrior sweeps in to protect her, he feels something more than body heat every time they touch. He is overwhelmed by a searing connection that goes deep into the twin souls inside him. A desire rises in him that is forbidden—this woman is his queen, the mate of his king, his leader, his best friend. And yet Docia is so vulnerable and attractive that she awakens a hunger in Ram that is undeniable, a carnal craving he cannot yield to . . . not without risking the very survival of the Bodywalkers.

I have enjoyed Jacob (Night Walkers #1) and Drink Of Me (a stand alone novel) by Jacquelyn Frank. Also have a few others in different series sitting on my shelf just waiting to be read. I really have no idea what I just read. It starts off good but when the characters started blending with in each other I was lost. I felt too much was happening. Too much going back and forth between the host (human) names and the original names. The story for me also dragged after awhile and was too easy to put down. Jacquelyn is known for writing some sweet, yummy alpha male, possessive, protective heroes but was not always feeling the main character. The sexual tension was ok in the beginning but I felt it got lost sometime in the novel and the sex scenes did nothing for me. I enjoyed Forbidden more towards the end with a twist and the prologue was good. I like the idea for this series but at this time I do not know If I will continue. Maybe someday I will as I would like to know how it all plays out from the prologue but if it is like this where it was too confusing then I do not think so.