ARC review: Tempted to Submit (Surrender to Temptation Part I) by Lauren Jameson 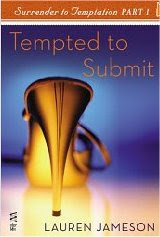 
In this stunning debut, Lauren Jameson presents a story of unexpected desire, where two strangers play a dangerous game in the quest for incredible pleasure. But winning comes with a price...
"Surrender to Temptation," Part I
"Tempted to Submit"

After walking in on her boyfriend with another woman, Devon Reid decides to seek solace in the small Californian town she's often visited on vacation. Instead, she finds herself consumed by a dark, mysterious man who sets her ablaze with a simple look. Devon has always been the good girl, but Zach's touch turns her into something primal, especially when he persuades her to give up control. But while Zach can make her burn, he also runs hot and cold, seducing Devon one moment and turning her away the next. When Devon starts her new job at Phyrefly Aviation, she learns that "Zach" is actually Zachariah St. Brenton, founder and CEO of the massive corporation. And while Devon knows she should keep things with Zach strictly professional, his overwhelming magnetism makes it impossible to stay away... Includes a bonus excerpt of Lauren Jameson's upcoming novel, "Blush." More to come...Don't miss "Surrender to Temptation," Part II, available 1/8.

Been looking for a good chapter by chapter series and Tempted To Submit sounded interesting. Unfortunately I was not into it and could not get connected with the characters. I felt there was too much detail in the beginning on what Devon was doing leading up to when she first meets Zach. Already was losing interest by the time she met him. When she catches her fiancé cheating was not feeling her pain. Zach was not appealing at all. There was just not enough there for me to get into him. I needed to know more about him and his thoughts. Really I was not feeling his Hot and Cold. For me I need more sexual tension leading up to the hero and heroines first sexual encounter. They meet, he hires her, a night out later they have sex in the back of his car. The plot sounds so good and it does have potential but for me I wish the first part was more of a build up leading to their first sexual experience when she submits. That on a sad note I will not continue on Devon’s and Zach journey.
ARC provided by NetGalley for an honest review