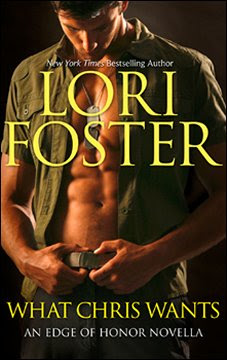 What Chris Wants (Men Who Walk the Edge of Honor #4.5)
by Lori Foster
E-Book 42 pages
Purchase Links: Amazon Barnes & Noble
Blurb by Goodreads
When the going gets tough, the tough turn to Chris Chapey. As the right-hand man to a group of take-no-prisoners mercenaries, Chris can organize a top secret rescue mission with his eyes closed. But when it comes to his personal life, Chris is the one who needs a little help.

His problem: Matt Houser. Chris can’t deny his attraction to Matt, but Matt has no idea what Chris’s job really entails and how much it means to him. Matt challenges Chris to change his life—and make a place for him in it. Can Chris risk telling him the truth?

Thank you Lori Foster for giving your fans Chris’s HEA and for only selling it for .99 cents. Awesome!! Not only does Lori Foster write amazing novels but she is a sweetheart that listened to all her fans when asking for Chris’s HEA especially since he was just a sexy secondary character that was not planned as ever getting his own story. That alone shot this up from a 4 star loved it novella to a 5 star perfect novella.
As for Chris HEA I enjoyed every moment of it especially since I got the whole gang from the Edge Of Honor series in it. Loved how it started off with Yummy Chris jumping into the lake and being surrounded by the gang in one of their many gatherings they love to have at Dare’s Lake House. The first part was great as it played just enough catch up on what everyone was up to and how they all became a part of Chris’s life. It was so much like reading her other novels with the loving ladies meddling in ones affair only because they know what is right and they new Chris and Matt were made for each other. Her Edge Of Honor series makes me want to be part of this family even though they are not per say all related. To my surprise I did not see a few things coming like with Dare and Trace doing something they usually do not do. Can not really say what it is. Do not want to ruin it for you all but just know I fell in love more with Dare and Trace! It made me want to reread their books like now.
I was curious on how Lori Foster was going to do M/M relationship. It was not what I expected, to be honest I was really hoping she would give some M/M action. Sorry fans did not happen for Chris and Matt but it still had me smiling. Really the two kiss scenes were very quick and did wish for at least more in depth with feeling. It worked for me because the first moment Matt and Chris were together (not in a sexual way) I already fell in love with them as a couple and could not swipe my Kindle fast enough to see if Chris was going to get his head out his bottom and realize he deserves to have someone in his life just like everyone else in the Edge Of Honor Series does. Lori still was able to give her fans her typical loving, sweet, alpha male hero.
Love the sexy cover with Chris wearing dogtags. Another to my surprise finding out where he got those dogtags. Sweet moment that put a smile on my face a mile long.
I did wish Chris had a longer novella (ok that is me just wanting more greedy time on Chirs) but am very thankful Lori Foster took the time to write What Chris Wants for her fans and ending The Edge Of Honor series with him. Highly recommend reading this series from the beginning to get a good idea on what Chris is like and the rest of the main characters. It is a series and author not to be missed.