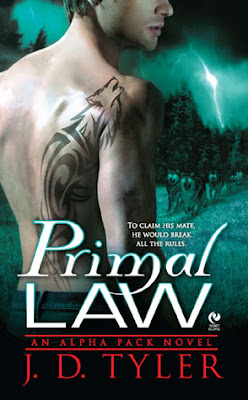 Blurb by Goodreads
Meet the Alpha Pack, a top-secret military team of wolf-shifters fighting the most dangerous predators in the world, human and nonhuman. After a massacre leaves Jaxon Law crippled, he must relearn how to fight-and battle the anger and guilt threatening to overwhelm him. But when Jax rescues a beautiful woman who awakens his primal instincts, he is unprepared for the dangers that lie ahead. Soon he must decide if the deep connection he feels with Kira is worth defying the ultimate shifter law...

Primal Law takes a different take on Wolf-shifters with special abilities, instant mating and other beings that are interesting. For me it is 3 stars - like it, good start to a series that sounds promising.
Jax liked him right from the beginning with his sexy wolf Tattoo, over protective side when he rescues Kira. Loved his sweet, bit jealous and alpha male attitude.
Kira was a sweetheart especially when it came to the other Paranormal beings. I love how all she wanted to do was help them. But considering Jax is a wolf shifter she really was not all that willing to help him.
The pacing of the novel was smooth but at times felt like it was more on world building than the romance department. But once the romance does kick in, it is sexy and the sexual tension is hot. The chemistry between Jax and Kira was nice and was rooting for them to get their HEA.
Love the action scenes and all the secondary characters including the other beings. With a good ending I look forward to see how this series plays out. Even though I just like this novel it is still a keeper as I can see re-reading it in the future.