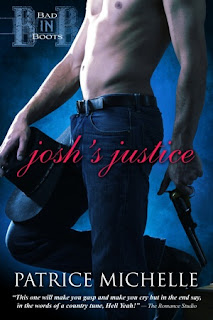 Sabrina Gentry isn’t one to take life lightly. The last thing she would ever do is cut loose, but when her boyfriend breaks up with her, claiming she’s too controlling, she decides to throw out everything she thought she knew about relationships. While on vacation visiting her friend Elise in Texas, she’s gives herself one main rule: The first man who trips your trigger, go for it! No questions, no reservations.The last thing she expected was for the one guy who tripped her trigger to make a pass at her thinking she was someone else. With her new rule in mind, Sabrina sets out to convince Josh Kelly she’s the woman he wants.

Josh Kelly couldn’t believe how much more attracted he was to his married neighbor Elise when he saw her perfectly shaped jean-clad rear from behind. When he discovers the woman he whispered a suggestive comment to wasn’t Elise, but her best friend Sabrina, he’s determined to get to know the woman who could make him lose all common sense.

When a near fatal accident brings Josh and Sabrina together, neither can deny the fierce attraction between them. But the path to love is never a smooth one, and as Sabrina and Josh uncover layers about each other that could tear their passionate relationship apart, danger still lurks, waiting to strike.

Note: Josh’s Justice was originally published as the novella titled Heart’s Afire in the Hearts are Wild anthology. Josh’s Justice has been extensively revised and expanded to novel length.

Yay baby! Patrice Michelle has done it again, 5 star novel, Josh’s Justice in her Bad In Boots series. Patrice is a talented writer that even though in Josh Justice the hero and heroine fall in love within 3 days it felt so real. I was so engrossed in the hero/heroine time together did not even realize it is happening within a few days.

OMG! I am crushing on Josh the sexy wearing wrangler Cowboy/Fireman hero. Fell head over heals in love with him right from the beginning. Josh helps on his parents ranch but he is also a fireman. A bad incident that happened when he was a child left him to be a Fireman. Heart wrenching what happened that made him want to be a Fireman. He spends most of his days in the fire station to help him cope with the bad incident, that is until he meets Sabrina. Now he wants to spend time with her. She makes him feel alive.

Sabrina lost her father to a fire he was fighting to put out. She never gotten over it, left her a little bit of a control freak. She just had a relationship ended because she tried to control him. She decides to take a vacation and visit her best friend from college on a ranch, then she decides she is going to live in the moment and not try to control everything around her. Well that is easy until she meets Josh and they have chemistry right from the beginning. But he is a Fireman and her control issues want to come to the surface.

Their chemistry is hot. The sexual tensions got me hot and bothered to many times to count. I have never been so jealous of a character before now. Patrice had me wanting to be Sabrina so bad, especially in the scene with Josh and Sabrina riding a horse together. I loved how Josh was able to keep Sabrina’s control matter under wraps especially in the bedroom. The little BDSM scene is wickedly delicious and written well. It was light and not over the top. The sex scenes will have you needing to take a cold shower and wishing you could find a yummy cowboy for yourself. Josh’s dirty talking mouth had me panting and wanting him all to my self. Not only did I find them sexy in bed but outside of the bedroom too. They are so adorable together and perfect. Loved when they were playful. They way they flirt and tease each other was a joy to read. They do have a few minor bumps but they are not overly drawn out. I could not swipe my kindle fast enough to see what was going to happen next.

Loved how Colt and Elise from Colt’s Choice (Bad In Boots #3) were part of the plot and how they are doing. Loved how the secondary characters are in it just enough that I want to know more. Mace had me giggling with his sexy charm and innocent flirting with Sabrina. I hope he gets his own story soon.

Patrice Michelle is an amazing story teller with a beautiful writing voice. She has the right amount of romance and a bit of mystery. Her novels are a feel good feeling. Josh's Justice is a keeper for me.  Look forward to see who is next up in her Bad In Boots series and can not wait to see the lovely cover.