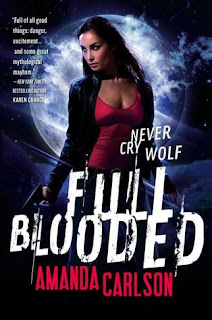 After living under the radar for the last twenty-six years, Jessica is thrust unexpectedly into her first change, a full ten years late. She wakes up and finds she’s in the middle of a storm. Now that she’s become the only female full-blooded werewolf in town, the supernatural world is already clamoring to take a bite out of her and her new Pack must rise up and protect her.

But not everyone is on board. The werewolf Rights of Laws is missing text and the superstitious werewolves think that Jessica means an end to their race. It doesn’t help when Jessica begins to realize she’s more. She can change partway and hold her form, and speak directly to her wolf. But the biggest complication by far is that her alpha father can't control her like he can the rest of his wolves.

When a mercenary who’s been hired by the vampires shows up to extract information about the newly turned werewolf only days after her change, they find themselves smack in the middle of a war and there's no choice but to run together. When it’s up to Jessica to negotiate her release against her father’s direct orders, she chooses to take an offer for help instead. In exchange, Jessica must now swear an oath she may end up repaying with her life.

Wow! Full Blooded (Jessica McClain #1) by Amanda Carlson is fan-freakin-tastic! Just what I needed to get back into the Urban Fantasy world.
Jessica has a serious problem. Female wolves are unheard of. Since she was born it was fine because she never shifted and everyone included her thought she never would. Her wolf has decided now to come to the surface and her biggest problem is she can do things no others wolves can. Not only now does other wolves want her but a higher supernatural being is interested in her. I loved Jessica’s character. She is kick butt, but not over the top. She has feelings and is confused as anyone would be since she never thought she would ever shift. She is witty and can hold her own in a fight. I loved how she can picture her wolf in her head and actually see what her wolf is doing. Her wolf gets agitated easy, wants let loose at the worst possible moments to fight and even mate a certain someone. This leads to some great moments when Jessica has to try to reason with and talk down her wolf in her head. I love Jessica’s relationship with her father who is Alpha of their pack and her brother. Since she shifted she can now mind talk with her dad and brother. Love those times as they are personal and poor Jessica can now get a good butt chewing not coming from her Alpha but as her father.
Loving those yummy alpha male secondary characters. You got her brother, best friend, a few pack mates on her side, James who is her dads right hand wolf and of course the sexy Werecat Rourke. James still do not know much about him but from the little I found out I think he is safe. Now Rourke.. oh my he is delicious and mysterious. There is more to Rourke then what he portrays and the rumors about him being dangerous and do not tick him off is just a front. Why correct rumors when they make everyone scared of him. Did not get all the goods on Rourke but just enough to where I can not wait to read more novels to unravel his mysterious side. At one point before Jessica meets Rourke he says some sexy graphic stuff to her in her mind. But we never know what he say’s, just a little bit of what she is repeating out loud. I do want to know what he was saying to her.
The plot was good and the world building was done just right. Amanda Carlson nailed it with just the right amount of world building. It is not over done and little by little she gives you a little more of this amazing world she has created. The ending left me wanting more. There is still so much we do not know about Jessica. I look forward to reading Hot Blooded (Jessica McClain #2)
ARC provided by NetGalley for an honest review