NA Review: Every Which Way by Calia Read 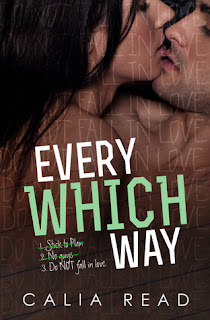 Every Which Way (Sloan Brothers #1)
by Calia Read
Purchase Link: Amazon
Blurb by Goodreads
Severine Blake has seen far too many friends taken down in the crossfires of dating. She devises a precise course of action to protect her heart. The plan is working very well...until she meets Thayer and Macsen.

When the Sloan brothers come into her life, nothing is the same.

Thayer is self-possessed, arrogant and used to getting what he wants. Being near him leaves Severine unsteady and shaken. He makes her question everything.

Macsen contradicts his brother in every way. His calm personality captivates her. Severine is drawn to him instantly.

But Severine quickly discovers that when you want something, that want can turn wicked. Giving in is not always easy, especially when your heart refuses to give up the fight.

What little illusion of love Severine has is soon destroyed. Every option is broken, and the protection she has built around her heart instantly crumbles.

There's just no right way with the Sloan brothers.

Every Which Way has an interesting plot that I like with two sexy Sloan brothers who are interested in the same girl. But the writing style is different and at times is hard to follow. I would have to read some sentences over again because they did not make any sense. At times I did feel like the scenes were cut off. For a New Adult novel this is light in the sex department and wanted it to be more steamy. Even the few sex scenes I felt were not finished. I would have to re-read because I was not sure they actually did anything.
Loved the storyline as I was shocked when an incident happens with one of the brothers that did break my heart and did not see coming. I seriously thought he was the one she was going to pick and thought there is no way he is the one because of a huge betrayal. What I loved about Every Which Way was Calia Read had me guessing the whole time if she was going to pick him even after the betrayal. I loved how I never knew how the story was going to play out.
Now for those sexy Sloan brothers who are so different. Macsen is the quiet book worm type who is the safe one for Severine. He makes her calm and that is what she needs. Thayer is the arrogant brother who is just like her, sure of herself and speaks her mind, they butt heads. Thayer is the brother I liked, as he is the more outspoken one and has no problem getting in your face and telling you how it is. The Sloan brothers have issues and do not get along especially Macsen and Thayer. My heart broke for Mascen when I found out why Thayer hates him. Then it broke my heart to find out why he is going to the same college and living with Thayer. Both brothers can get a bit jealous and possessive of Severine. The sexual tension was not there for me and felt I was told that there was sexual tension than feeling it.
Even though I have a few issues with Every Which Way and gave 3 stars like it rating does not mean I dislike Every Which Way. I still could not swipe my kindle fast enough to see what brother Severine would pick and had to know what was the riff all about with Thayer and Mascen. The ending is not a cliffhanger but it did leave me curious as to how are things going to play out with a new added plot and if the brothers will ever rekindle their relationship.