18 & Over Book Blogger Follow is a weekly feature that begins on Fridays and runs through the weekend, hosted by Crystal from Reading Between The Wines. This is a Friday blog hop with the objective to find and visit other book blogs that share the same interest as you, namely books geared towards the 18 & over crowd, and make some new friends!

Q: What is your favorite romantic trope to read about and which is your least favorite?

A: Mine would have to be best friends little sister. Dangerous Games by Lora Leigh is my favorite. Can not at the moment think what would be my least favorite. 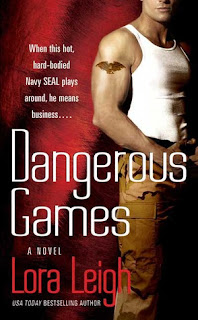 Dangerous Games (Tempting SEALs #2)
by Lora Leigh
Blurb by goodreads
It's not whether you win or lost.

Navy SEAL Clint "Iceman" McIntyre didn't earn his nickname by being a coward. Or a quitter. Having crushed an infamous drug cartel in Colombia, Clint was nothing short of an American hero. Now he's home, on a much-needed leave, but instead of some R&R, he finds himself neck-deep in trouble with his best friend's little sister, Morganna Chavez, the only woman who has the power to bring him to his knees. . .

Morganna has been secretly working with the DEA to uncover a thriving date-rape drug, which leads her to a shadowy faction that is more deadly than anything her team has ever encountered. Now it's up to Clint to keep this beautiful, determined agent out of harm's way, even while the passion between them threatens to consume them. Soon Clint's greatest mission will be not just keeping Morganna safe, but getting her into his arms and never letting go.
﻿
Posted by JoLee @ Wickedly Delicious Book Blog
Email ThisBlogThis!Share to TwitterShare to FacebookShare to Pinterest
Labels: 18 and Over Book Blog Follow, Lora Leigh, Suspense Romance