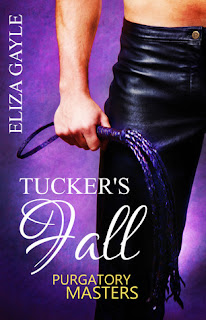 Just when she thinks her only solution is a tell all memoir, a snowstorm puts her in the path of stunningly handsome, insanely rich and equally intense, Tucker Lewis.

Tucker remembers Maggie well. They once shared a mind-numbing kiss at the annual St. Mary’s carnival when her boyfriend wasn’t looking. No stranger to scandal, he looks past public opinion to the submissive craving a master’s touch and decides then and there what he wants. He’s going after Maggie and her heart’s kinkiest desires.

Unfortunately, no amount of money can change the sins of the past and when they’re certain they know everything there is to know about each other, one discovers a secret they aren’t prepared for.

I loved Eliza Gayle, Midnight Playground (Pleasure Playground #1) and was excited she was coming out with a new series Purgatory Masters, Tucker’s Fall being the first in this series. I was a bit disappointed as it is a 2 star - Ok novel for me. I am a huge  fan of BDSM novels but was not feeling Tucker‘s Fall. I could not connect with the characters as they were a bit flat. The BDSM scenes did nothing for me as Tucker commanding Maggie what to do. I wanted better dirty talking and more soft caresses to get my heart pounding. For a Dom he sure does not know when Maggie was ready for a scene in the club that made her take off crying. Even admitting he made a mistake and should of not assumed she was ready. Could of done with out her falling to the floor in the car during a sex scene. I felt this scene was pushed for them to have some kind of good laugh and for her to mention maybe it was a sign they were not meant to be together.
As for the plot I felt like I was reading two stories. One about Maggie coming home to mend her wounds and then later on in the novel, the other which I found more interesting was about something to do with Tucker, Levi, Mason and Tucker’s Father and might be connected to the club. Really have no clue what is going with that since I am left hanging. I would of liked less inner thoughts with Maggie and Tucker of what they thought of each other, sex scenes cut back a little and maybe more info on what happened with Tucker, Levi and Mason.
I really thought this novel would be about sexy Doms from the Club and each novel would be about a different character. I am assuming from the ending of this novel it is about a bad incident the owners and good friends Tucker, Mason and Levi did.
Even though I only thought Tucker’s Fall was an OK novel I will still read book 2. I am curious to know what they did that was so bad. I loved Eliza Gayle writing voice in Midnight Playground (Pleasure Playground #1) and hope I get to see it in Purgatory Masters #2. If Tucker’s Fall had more info on the incident with Levi, Mason and Tucker I would of rated it 3 stars - Liked it.
ARC provided by publisher, Gypsy Ink Books for an honest review.