Hello Lovelies! I can not take credit for finding this sexy series Hot Rods by Jayne Rylon. A huge thank you to CS Maxwell ~ Where's My Muse? blog for having it on her blog. I have not read anything by Jayne Rylon but she had me with "Nothing’s sexier than seven men with hot rods".  Sold!! April 16 can not get here soon enough.

Love to know what you think of my pick this week for Sexy Series. 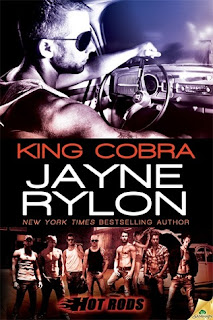 After Eli’s mother died, his father honored her life’s mission as a social worker by taking in several kids from the wrong side of the tracks. Not all of them stuck, but those who did became Eli’s quasi family.

Their bonds, forged in fires set by their personal demons, are unbreakable—or so Eli wants to believe. Especially since he and Alanso, his best friend and head mechanic, witnessed the overpowering allure of polyamory while visiting the Powertools crew.

Much as Eli would like to deepen the relationships among his foster brothers and sister in the Hot Rods Restoration Team, he’s hesitant to risk everything on a quick romp behind a stack of tires.

But when Eli catches Alanso exploring their mutual fantasy at a known hookup spot in a public park, all bets are off. And Eli must decide if it’s time to jump in full throttle—and trust his instincts to guide him through the night. If the pair of mechanics can dodge the potholes in their own relationship, maybe they can race together toward the unconventional arrangement with Mustang Sally they both desire.

Warning: Fasten your seatbelts, this is going to be a wild (and naughty) ride! 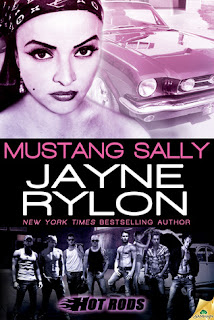 ﻿Mustang Sally (Hot Rods #2)
Release Date: June 4, 2013
Blurb by Goodreads
Two men will give her the ride of her life.

Salome “Sally” Rider is flooring the gas pedal of her pink ’69 Mustang, desperate to outrun the memory of two of her fellow mechanics getting busy with some bar skank on the hood of a classic car. On her custom paint job.

For years her emotions have withered while her lost boys, her Hot Rods, have grown closer than brothers. Maybe some downtime with the Powertools sexperts will help her figure out why Eli and Alanso went looking for some stranger when Sally was waiting right at the ends of their grease-smudged noses.

Sally is dead wrong about what she thought she saw, and Eli “King Cobra” London and the rest of the thoroughly rattled Hot Rods are determined to prove it. They’ll show her in the sexiest possible way that she’s not merely an interchangeable part in their well-oiled machine.

Yet just as Eli gets up the nerve to make a very indecent proposal, a ghost rises from her painful past. Threatening to slam the brakes on their future before they can get it in gear.