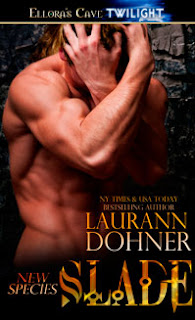 Dr. Trisha Norbit is flat on her back in a hospital bed, pinned under a really big New Species male. Though drugged out of his mind, he promises her ecstasy and is determined to deliver—but hospital staff intervenes. 215 is a man Trisha will never forget. But, when she meets him again at Homeland…he doesn’t even remember her!

The nosy new doctor wants to know all about the breeding habits between humans and Species. Slade proposes a hands-on education but she’s not interested in a one-night stand. He can’t offer more because he’s haunted by the memory of a woman he once tried to claim. He’s shocked when he realizes they are one and the same. He’s blown it—she’ll never give him a chance now.

But, when her life is in danger, he’s the only one who can save her. As they flee through the wilderness, their desire ignites and cannot be denied. Hot sex, on the run, has consequences that are even more dangerous and will change their lives forever.

My thoughts:
I really wanted to like this book. Actually stopped in the middle to try another 2 books from LD. So happy I did love her books. Well came back to Slade and the first half of the book kind of dragged, but the second part picked up and enjoyed it.

Pros:
First sex scene was fan your self sexy.
Slade smart mouth character was throughout book
Slade as alpha picked up
Huge twist that was amazing made the book so much better
Trisha friendship with other New Species memorable
Later on in book gets emotional and good

Cons:
The action in first half of book dragged on
Slade did not seem to alpha for me more of a smart mouth
Did not feel the connection for Slade and Trisha

I really wish I would of given Slade a chance the first time and read all at once. We meet Valiant who is the next in line for his own story (would of gotten a better feel of him before I read his book) and plus got to see Slade and Trisha. My loss. If new to LD stick to reading in order and give her a chance. They only get better as Valiant is an amazing read. These books can be stand alone and always know what is going on, but so much better to read in order as we meet new characters in books.