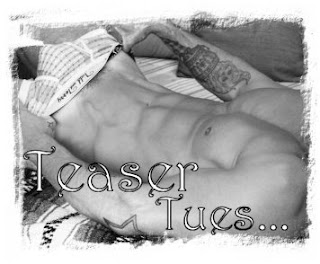 Teaser Tuesday is a weekly meme hosted by MizB at Should Be Reading. This meme is simple and fun, you just pick up your current read, flip to a random page, and choose 1 or 2 teaser sentences to share!


My Teaser﻿
﻿
Damon stopped in the middle of the mat and turned toward her. "Lay down and spread your legs."

Nicole stopped suddenly her eyes shooting from his ass to his face. "Ah most guys buy me a drink first." At his raised eyebrow, Nicole snorted. "Okay, sorry. Just a joke. You know you can probably buy a sense of humor on Craigslist."

﻿
I am loving Damon and Nicole''s story and the first novel in what looks to be a great series. With yummy warrior heroes and kick ass heroine's.  It was so nice to see Damon this huge warrior who is use to fighting and killing bad guys, actually enjoying playtime with Nicole during one of their training sessions. This scene is fun and playful. 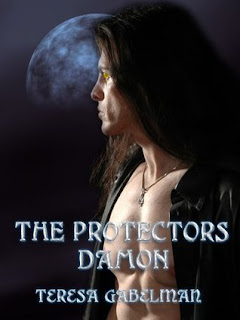 Blurb:
Damon DeMasters is a vampire warrior who has taken an oath to not only protect his own kind, but humans as well. Crimson Rush is the new drug on the streets and it’s their duty to find who is behind the selling of vampire blood and stop it.

As a social worker, Nicole Callahan fights for the right of every child placed in her care. There’s a war now as vampires have stepped out into the spotlight taking their place in society and the children are at the heart of it all.

Damon and his fellow warriors have been ordered by the Vampire Council to train Nicole and her colleagues against the dangers they now face in their new world. Even as sparks fly and tensions mount, Nicole and Damon depend on each other to protect the children of both races.
Posted by JoLee @ Wickedly Delicious Book Blog
Email ThisBlogThis!Share to TwitterShare to FacebookShare to Pinterest
Labels: Paranormal Romance, Teaser Tues..., Teresa Gabelman