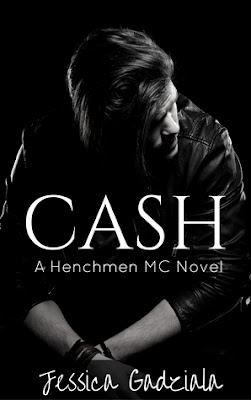 The Henchmen return, this time with CASH as our leading man.

My life has been about three things- brotherhood, good times, and women. Easy. Nothing complicated. That was until Willow Swift came barging back into my life, face bloodied, banging at the gates of The Henchmen compound calling in a favor owed. Now a marker is a marker and I had to make good, but if there was one woman in the world I didn't need in my life, it was the hard-as-stone, hot-as-sin Willow Swift and whatever mysterious ghosts from her past that were haunting her present.

My life has been nothing but two things: hard and complicated. The last person I wanted in my business was the notorious love-em and leave-em Cash, but I needed help and he was the only one I could lean on without worrying about him finding out about my past. But I was starting to wonder if maybe he was his own kind of dangerous bent on tearing down some things I had long since learned were not possible for me- like falling for a guy I could not, ever, let see the real me.


While this can be read as a stand-alone, you will get more out of this book if you read "Reign" and "Monster" first.

Rating: 3 Stars - Liked It
POV: Dual 1st
Thoughts: Started off good with some fun time bickering with Willow and Cash. Adored his flirty laid back attitude. His personality did help me to cope with her over the top kick ass attitude. He was the perfect guy for her. He had a way of breaking down this huge wall she has built to never let anyone get close to her. I have no experience what she went through in her past and never would want to. I at least have a understanding at why she became the woman she is today. The bad guy is full on creepy.
Was looking forward to Cash and Willow story. Was not a hit but also was not a bust either. Did have the same scenario with Cash not letting his MC brothers in on what was going on with Willow like the first book did with its hero/heroine. Wanted something different in that direction. Same as book one, good plot idea but a lot happens last half of book. Once again repetitive Dual 1st POV.
Noted that this can be a stand alone. But better if read Reign (Henchmen MC #1) the first book and Monster (Savages #1) a different series. I did read Reign first and enjoyed Cash and Willow as secondary characters. I did not read Monster as was not lost. I assuming the one new character is from there. There were 3 groups in this book. I am curious if this series is really going to be focusing more on each couple and the MC life taking the back burner. I was hoping to get more of the MC life and their doings. Once again I am interested in the secondary characters.