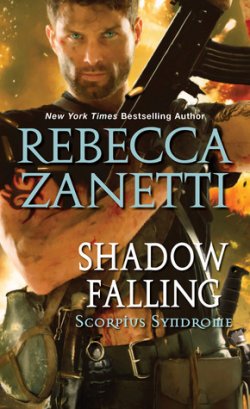 Before the Scorpius Syndrome tore through North America and nearly wiped out the population, Vivienne Wellington was the FBI’s best profiler. The bacteria got her anyway. But she survived. She recovered. And when she woke up from a drug-nightmare of captivity, her skills as a hunter of men had gone from merely brilliant to full-on uncanny. Her mysterious rescuer wants her to put them to the test. But no matter how tempting he is, with his angel’s eyes and devil’s tongue, Vinnie knows she shouldn’t trust him.

If the FBI were still around they would rate Raze Shadow as one of the bad guys. His military training can’t wipe out his association with the Mercenaries, the most feared gang in a thousand miles. His loyalties are compromised. He won’t even tell Vinnie his real name. But there’s no FBI in the new America of fear and firepower, only instinct and risk. And the way his arms wrap around her tells its own story. Whatever else Raze is concealing, he can’t hide his desire . . .

Rating: 4 Stars - Loved It
Thoughts:  Shadow Falling was a great follow up to Mercury Striking book one. Once again Rebecca Zanetti gave me an alpha male hero to fall for. Anybody Raze cares for it is in his nature to protect them. He has his reasons for being in Vanguard the safe-haven where Jax from Mercury Striking is the leader. Jax still does not fully trust a lot of people and the one who he really is not trusting is Raze. Interesting moments with these two.
Vinnie I just adored her character. She was kind of quirky and had a tendency to speak what she was thinking without really wanting to. She really needed a place to feel wanted. Loved the friendship she had with Lynne. Their girl time was fun and never took away from the story. It showed that they are still human and trying to survive as best as they can.
Jax and Lynne from book one play a big part in Shadow Falling. Loved seeing how they are doing. He is a hard ass leader and is set in his ways. Love that she is there to help him feel for others emotions. While I was missing the close knit community before I started to feel that everyone is slowly becoming close. Loving the secondary characters more. Like Rebecca Zanetti style always part of the story and this time around were so much fun seeing them interacting. Not only does Rebecca Zanetti teases her readers with one possible couple but two. I have not read any of the synopsis for future books so I am really hoping a certain couple who the possible hero I have no clue if he is a bad or good guy get a story.
Few plots going on that help break up the book for me. Not only have the plot with Raze his secrecy and the follow to that but inside Vanguard drama dealing with the Priest.