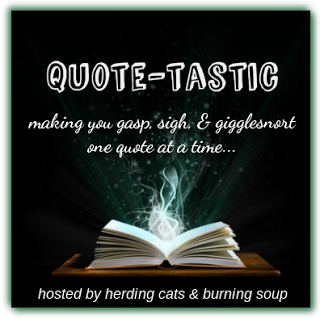 Quote-Tastic is a weekly meme hosted by Anna @ Herding Cats & Burning Soup. Share a favorite quotes that's grabbed your for one reason or another. You can ad a review or post just a quote 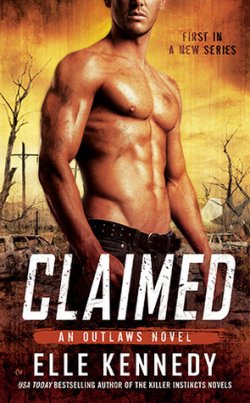 The bestselling author of the Killer Instincts novels “knows how to write scorching sexual tension” (USA Today). Now she really sets it on fire in a new series about men and women living on the edge of violence, sex, and life and death.

After a devastating war decimated most of the world, Hudson Lane has only known the oppressive life under her own father’s tyranny. She finally escapes, branding herself an outlaw and hunted by the Enforcers. Her best chance at survival is Connor Mackenzie, an aggressively sensual fugitive who opens her eyes to the wicked possibilities of a world without rules.

As the leader of a band of outlaw fighters, Connor can’t resist the beautiful stranger who asks for his protection. Despite his reservations, he agrees to introduce her to a whole new way of life. But when Connor discovers Hudson’s connection to the enemies of liberty, he wonders how far he can trust the woman who has abandoned all inhibitions to challenge every forbidden desire.

Rating: 3 Stars - Liked It
Thoughts: What an interesting world Elle Kennedy has created. Have Global Council that run a strict controlled environment where Hudson the heroine is running from. Then have the outlaws who live in the moment. What a bunch of highly sexual characters. Sexual encounters (M/F/M and Voyeur) is part of their life and not embarrassed. Love their out look on life in a Dystopia world. As for the Erotic in Claimed loved it. Well written sexy times with a delicious dirty talking hero. The sexual tension was amazing.
"He's close, baby. Suck harder. Work that cock until you get him there."
Connor was an interesting character as Hudson was trying to figure him out I was right there with her. I was just as frustrated like Hudson wondering why he will not give her what she wants sexually. He is a grouch, jerk and straight to the point and  I loved it. Once I found out about his past everything made sense.
"You started all this by licking Ry, remember? Next time, if you want me inside you, I suggest you lick me."
This is the second novel I have read by Elle Kennedy and once again loving her heroine. Wow was she a sexually aroused  sweet heart. Loved that now she is free from her world of being controlled she is not shy and wants to experience Connors world. Seeing her form a friendship with the secondary characters was wonderful. Really feel her fitting in with Connor's small tight group of not by blood family.
I loved that I already have my favorite secondary characters and want to know more about. Pike with his she devil wolf could not get enough of. What is up with his grouchy ass. Rylan the charmer I want and need to know more about him and The Reigning Queen of Foxworth.
I knew going in this was an erotic novel. As much as I loved all the characters in Claimed I needed a good balance between the erotic moments and the overall story. Beginning and ending was amazing but the middle did feel like a sex fest filler. Maybe I am just greedy and wanted more time spent with all the characters.  I do want to find out what is happening with the other characters.