Review: All Chained Up (Devil's Rock #1) by Sophie Jordan 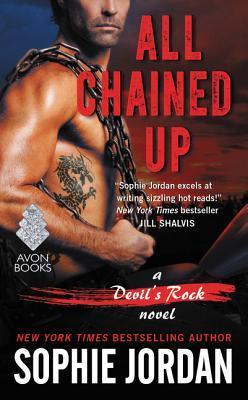 There are bad boys and then there are the men of Devil’s Rock . . .
Some men come with a built-in warning label. Knox Callaghan is one of them. Danger radiates from every lean, muscled inch of him, and his deep blue eyes seem to see right through to Briar Davis’s most secret fantasies. But there’s one major problem: Briar is a nurse volunteering at the local prison, and Knox is an inmate who should be off-limits in every way.

Knox feels it too—a shocking animal magnetism that drives him to risk his own life to protect Briar’s. Paroled at last, he tries to resist her. She’s too innocent, too sweet, and she has no idea what Knox is capable of. But a single touch can lead to a kiss—and a taste . . . until the only crime is denying what feels so right . . .

Rating: 3 Stars - Liked it
POV: 3rd
Thoughts: Enjoyed the beginning while in prison had a intense moment. Once Knox was paroled I was not feeling  his and Briar's connection. Was very easy for me to put the book down and pick back up. Finally hit around 50% and started to really get into it.
They have casual hook ups, do not know anything about each other and I did not know anything really about them either. Like why was Knox in prison (found out later than I wanted)? They are both hot and cold with each other. I understand his push and pull with her. He thinks she can do better. He is trying to put his life back together and finding out it is harder than he thought.
"I'm not in prison anymore, but I'm still paying for my crime. I'll pay every day for the rest of my life."
Briar took some time for me to warm up to and was not feeling she was the best choice for Knox. Poor guy really has no one left. He has guilt over the event that led him and his brother in prison. He already feels he does not deserve happiness. Has no one really left as his brother is still in jail. He feels she is ashamed of him by her actions. Her actions broke my heart for him.  Briar has her reasons for her push and pull with him. It just took me a while to really get on board with it and understand her reasons. Once I warmed up to her I was rooting for them to have their HEA.
I am curious and nervous about Reid. I believe his story is up next. I am a bit nervous for his story because I do not know how realistic it is going to be.