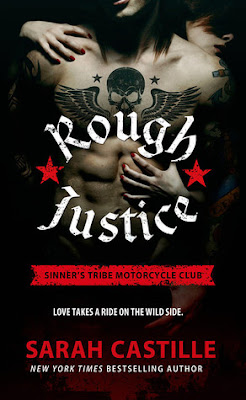 From bestselling author Sarah Castille comes a scorching new series featuring red-hot, hard-riding bikers and the women who can’t help but love them…

IT TAKES A GOOD, STRONG WOMAN

Raised in a motorcycle gang, tough, beautiful Arianne Hunter has always dreamed of a normal life. But no sooner does she escape her father’s domineering grasp than she wakes up to find herself in a rival gang’s clubhouse—at the mercy of the dangerously sexy Jagger Knight.

TO TAME A MAN WHO’S HELL ON WHEELS.

The alpha leader of the notorious Sinner’s Tribe, Jagger Knight is all muscle, all biker, and all man. But somewhere inside this hard tattooed outlaw, Arianne senses a kindred spirit—and she can’t ignore their tempestuous attraction. Can she beat him at his own game in a revved-up blaze of glory? Or will their passion spark a war that’s the end of the road for them both?

Thoughts: It has been some time since I read Rough Justice. As I am trying to catch up on my reviews from my long blog hiatus I realized I did a meme for Rough Justice but never did my review. While I am always looking for a new Biker Romance to win me over I still think about Rough Justice. It has everything I love in my biker reads. Gritty feel when needed and not over the top with eye rolling shocker moments. MC drama with action. Alpha Male hero that is protective but also can be gentle when needed. Brotherhood feel and fun banter with the club members.

Jagger was such an interesting character. He is calm, in control of everything and everyone around him. Loved that he does not disrespect woman.  He is one to use his brains before his fist in certain situations. But make no mistakes  because someone pushes him too far he has no problems giving a good ass whipping. Jagger made my book boyfriend list and fell hard for his character. When he loves he loves hard.

Arianne ~ "Why would you care what happened to me? That's all in the past."

Jagger bent down and touched his forehead to hers. "Because you're mine. And 'mine' means you have my protection. 'Mine' means I'll look after you. It means nothing happens you don't want to happen and no one touches you without your consent. It means your life is in my hands and I will do everything in my power to ensure you are safe and secure and your needs are met. It means something happened to you that twisted your perception so bad, you look at us and you see only them. I'll make that right. I'll give you justice. I'll give you back whatever was taken from you."
Arianne I loved her character and she was perfect for Jagger. She knows the biker life but her life was so different from how  Sinner's Tribe MC treat their woman. She knows nothing but how bad her dad the president of a rival MC and his members treated her and their woman. She can hold her own in the biker world but at the same time know when she can not. She is his equal and has his back. All she has left for family is her brother and she wants so badly to save him from falling in their father's   footsteps. But the problem is he has already started falling in their dads footsteps. My heart ached for her as she was so determined to save and help her brother.