Reading Sweet Revenge now and so far the bar scene where Matt works while he is on a mission is my favorite. Laney owns the bar and is his boss. Love that she is a  jealous heroine and trying to make it seem  like she is not. Love their chemistry, the banter between them and he was able to shock her. Always a bonus having a dirty-talking hero. 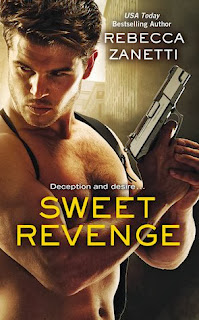 “Stop smiling, stop flirting, and do your job.”

He lowered his face just enough to make her eyes widen. “You sound jealous.”

Ah. There was the fury. “I’m not you jackass. Keep the charm in your pants and stop flirting.”

Okay. He may have poured on the charm with the two women he needed to investigate, but he’d been trained in subtly and covert action. “Why are you suddenly interested in what’s in my pants?”

Laney’s gasp heated him in all sorts of places. “If I have to tell you again to knock it off, you’re fired.”

The little spitfire had better be careful who she threatened. “So you want me unavailable to those women?”

“Okay.” He grasped her hip and covered her mouth with his. The kiss was hard, quick, and enough of a taste to make him crave more. He lifted away to gauge the shock on her face. “There. Now they think I’m taken.”

The air vibrated as her hand closed into a fist, and he shook his head. "You don't want to hit me."

For the first time, he let his mask slip so she could see the predator the government had created. "The second you make contact, I'll have you on that bar, held tight, my cock pressed between your legs, my lips on yours until you beg for more. Even fully clothed, I may make you come-and I won't care who's watching."

Quote is taken from an ARC copy and may be changed or taken away from final version. Kindle Location 609 - 11%

Matt Dean was born to fight…and kill. A member of a secret black-ops military unit, he and his brothers were genetically engineered by the government to be the perfect soldiers with an expiration date. Now, with time running out, he's gone rogue in a relentless quest for the one person who can save them. His mission leads him to Charmed, Idaho…and to a beautiful woman with eyes like emeralds and a body made for pleasure.

The One Woman He Can't Resist

Laney Jacobs knows the mysterious, handsome stranger is trouble from the moment he walks into her bar, looking for a job. She's spent years running from her own past—the last thing she needs is a romantic entanglement. But Matt's strong arms offer her protection, and his gentle touch promises passion unlike anything she's ever known. As lethal forces surround them, revealing explosive secrets about Matt's past and putting everything—and everyone—he holds dear in danger, can he save them all before time runs out?