ARC Review: Torn From You by Nashoda Rose 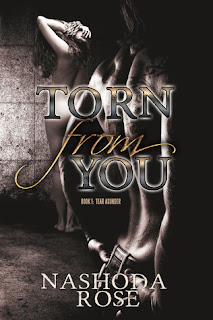 Torn from You (Tear Asunder #1)
by Nashoda Rose
Blurb by Goodreads
Love is like an avalanche. It hits hard, fast and without mercy.

At least it did for me when Sculpt, the lead singer of the rock band Tear Asunder knocked me off my feet. Literally, because he’s also a fighter, illegally of course, and he taught me how to fight. He also taught me how to love and I fell hard for him. I mean the guy could do sweet, when he wasn't doing bossy, and I like sweet.

Then it all shattered.

Kidnapped.
Starved.
Beaten.
I was alone and fighting to survive.
When I heard Sculpt's voice, I thought he was there to save me.

(It is recommended to read "With You" the novella first, however not necessary).


This is a love story with some dark elements. Dark contemporary romance. No cliffhanger and next in the Tear Asunder series is Ream's story (the band's lead guitarist).

Spoil Free Review
The synopsis caught my attention but sadly it was nothing like it says it is suppose to be. First off there is only a small prologue with them together and in that I did not get Sculpt knocking her off her feet, I did not get "he taught her how to fight or taught her how to love" before it all shattered. Right in the prologue I could not connect with the hero and heroine. It was quick and seemed more like a recap of what went on in With You (Tear Asunder 0.5).  It says it is recommended to read "With You" first, but not necessary. I would disagree and feel it is necessary to read "With You" first because readers do not get enough on their relationship with in the prologue before the story starts off  with her being kidnap. After her abduction I hated the hero ASAP. I tend to like my romances with maybe the hero a bit mystery and then falling in love with his character or falling in love with his character, then maybe wanting to strangle him and then he redeems himself. Not in this case. The hero watches while she is being tortured, literally getting smacked around, ribs getting kicked and then to top it off the bad guy playing with her private parts.  Then came when she got whipped many times in the back and I had no clue who was doing the hitting, At first thought it was maybe the hero and about that point I was ready to call it a DNF.  But I stuck with it and glad I did because the hero was not the one hitting her. Yes it was hard at times to read especially while she was held as a sex slave. Reading during this time especially with other sex slaves in very descriptive writing was not faint for the heart and love that in reads when reading a dark novel.
There is a huge twist that I loved and was unpredictable. Then things started getting interesting and I was caught with another surprise. But for me the damage was already done in the beginning and I still could not like Logan the tattoo-underground fighter-member of a rock band-alpha male hero. After the beginning he could not redeem himself in my eyes. Things through out the novel did not move smoothly. One minute he is standing by watching a bad guy basically fondling her and in the next when the guy says he is going to sleep with her he gets all possessive and is about to beat the crap out of him. He is hot and cold and later on he had a few more jealous, possessive moments that I love in my heroes but still was not enough for me.
As for the heroine I could not feel her pain while being a sex slave. At one time she says she can not go back to being in the dark again she was afraid and could not do it. Not once was never aware how this affected her the first time she was in a dark room.
I love Dark Captive reads but this was all over the place. I really do not know what I read. At times it reads like a dark contemporary with a Captive element then it reads as a romantic suspense with a smidge of BDSM more so on the erotic side with some scorching panty changing scenes and then it reads like a contemporary romance with a rock band. Then there are too many characters that are not who they seem to be. There was one I was shocked about towards the end and wonder if he would play more roles in future novels. I hated him in the beginning and do not know if he suppose to be a good guy or is a bad guy.
Now for the secondary characters I can see Georgia and Deck, Kat and Ream having their own story and was interested in theses characters. With Ream and Kat I am curious as to what happened between them. It is so hard to tell because I felt like their part at times is not complete and felt coded. Like I was missing something. Then to top it off Ream does something towards the end that already I hate his character for. I am so bummed because I was really getting interested in him and Kat but not now. At this moment I do not know if I will continue with Ream story just like with Logan he has already got me ticked off about his character. In my opinion not a good way to start a story off but over all I am still curious about what happened between them.
Torn From You has potential to be a good read and a good start to what seems like it would be an interesting series. But for me there was way too much going on and at times confusing. Too many times jumps around and readers are slapped in the face with what just happened. Needed more leading up to a lot of scenes. Too many times had no idea who was doing what and felt like I was missing something.  Very choppy with not enough layers and when a layer is finally peeled readers are left with something choppy again and so on. I know I will not read the first novella "With You"  which by the way wish it would of came out before this and not the same time as I have no interest in seeing how their life started before Emily's was shattered.  Now about continuing the series,  Not only am I curious about Ream but I am also curious if this sex slavery is going to be part of the theme for the series.  I am sure the curiosity is going to win as it always does.

ARC provided by author at NetGalley for an honest review.
Add To Goodreads