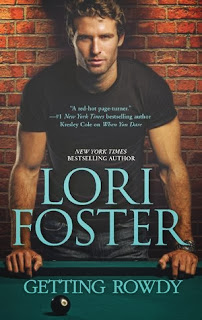 Getting Rowdy (Love Undercover #3)
By Lori Foster
Publisher: Harlequin
Purchase Links: Amazon  Barnes & Noble
Blurb by Goodreads
An alpha hero's attraction to the one woman he can't have could draw him into a killer's snare in the sizzling new novel from New York Times bestselling author Lori Foster

Charismatic bar owner Rowdy Yates isn’t the kind of man women say no to. So when he approaches waitress Avery Mullins, he fully expects to get her number. However, the elusive beauty has her reasons for keeping her distance—including a past that might come back to haunt them both.

Avery spends her nights working for tips… and trying to forget the secret Rowdy is determined to unearth. But when history threatens to repeat itself, Avery grows to rely on Rowdy’s protective presence. As the sparks between them ignite, she will be forced to choose between the security she’s finally found… and the passion she’s always wanted..

Spoil Free Review
It was my pleasure to read Getting Rowdy with a very nice descriptive image of him from his cover. 100% hotness Rowdy has going on.
I was excited but at the same a bit nervous to read Rowdy's story. Rowdy has been a huge character since the beginning of Love Undercover Series and one of my favorite secondary characters. He has always been a ladies man and never apologizes for it. Since the beginning readers just knew Avery and Rowdy would get their own story. I knew going into their story Lori Foster would deliver a well match couple but for me I was nervous to see if Lori was going to keep him true to his character from previous novels. What was I thinking. Really this is Lori Foster and she has always had her characters true from previous novels. Thank you Lori for having his character like he has always been.
Readers are either going to love or hate his character, especially after the "Office Scene". I loved it and happy it started out that way. Rowdy has had a rough childhood and because of his past he does not believe in love or settling down. He is a sweet hero who does have a alpha male attitude when it comes to people he cares about.  He has never had to pursue any lover to his bed but with Avery she was not going to be one of his one night stands.
Love that Avery was not a broken character just had a bad incident that left her running to start a fresh life. Their relationship starts off as friendship before getting intimate and loved that there was no insta-love. While she is falling in love with him and lets him know it she never once expected him to do the same. She knew what his feelings were about love and settling down.  She knew deep down he really cared for her by his actions and that work well for her. I will admit my heart broke for her when she would tell him she loved him and he would not respond back. Lori Foster did an outstanding job developing his character. Little by little readers get to see and experience Rowdy falling in love with her. Rowdy and Avery have beautiful chemistry and hot fan-your-self bedroom scenes. Another couple to add to my favorite book couples.
Loved that a new character was introduce Cannon and hope we get to see more of him.  As always love seeing how the other characters from previous novels are doing and how some get to be a part of Rowdy's story too. Was a little bummed did not get Dash and the lake house. But happy it was not in Getting Rowdy as I do not think the way the plot was going the lake house would fit in the story line. Wish Dash was more in Getting Rowdy like in earlier novels but can not complain too much as got to get a little bit of him and Lieutenant Peterson. Nicely placed to set up for their story in Dash of Peril (Love Undercover #4). Excited to see how these two are going to work together.
Add To Goodreads
ARC Provided by publisher, Harlequin at NetGalley For an honest review.
Other books in series with my ratings:
Run The Risk (#1) - 4
Bare It All (#2) - 4