Stacking the Shelves is hosted by Tynga's Reviews 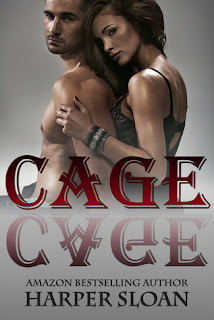 Cage (Corps Security #2)
by Harper Sloan
Add To Goodreads
Greg Cage was born to protect. While growing up, he was his mother and sister’s shield against the world… until he failed. For the last decade, he has carried that guilt and need for vengeance around… until it was stripped from him. Now, with his best friend getting married and no longer needing his protection, he is even more lost, completely adrift, and desperate for some control. All he has ever known was how to protect: his family, his friends, and his country. Can he go against everything he has ever known, and give up that control?

Melissa Larson will never let anyone hold the reins in her life. She has been the rock in her family for more years than she can remember, and the fight to keep them together is her main priority right now. She has always been fiercely independent and proud. The last thing she will ever do is ask for someone else’s help. But when that choice is out of her control, forcing her to rely on others to save her and her family, and pick up the pieces that are left, will she be able to let someone else be her strength?

The second Greg locks eyes with Meli, he knows that she is someone he needs. Someone he craves. Meli knew the second she met Greg that he would be nothing but trouble and heartache. Her life takes an unexpected turn, and that bitch Fate is back to wreak more havoc on another member of the Corps family.

All hell breaks loose, leaving Greg no choice but to call in a favor. He hooks back up with his old friend Braxxon Breaker from the Breakneck MC. Together, they make sure that nothing threatens anyone Greg loves again. 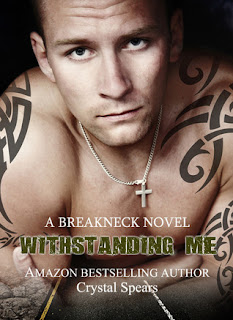 Withstanding Me (Breakneck #2)
by Crystal Spears
Add To Goodreads
While the chaos and bloodshed have slowed for a short period, life is never quiet in the world of Breakneck. The club is taking time to regroup from internal betrayal and the changing of the guard in a rival group.
Zig Zag became a father at the age of thirteen. While raising a child has never been easy, now his eighteen year old daughter Tatiana makes his life downright hard. She has caught the eye of Travis, the new President of the rival MC Gunners, but all she really wants is Shadow, the newest addition to the Breakneck family. When Shadow’s rejection sends Tatiana running from the only family, home, and safety she’s ever known, ZZ is crazy with worry. The distraction caused by Tatiana’s disappearance could prove to be Zig Zag’s downfall.

If that isn’t enough, ZZ finds himself rampantly attracted to the one and only Storm. She’s beautiful, quick and witty. Their friendship is the one thing that keeps him from growing crazy, and Storm stands by ZZ through all the turmoil. Zig Zag is not accustomed to hearing the word no, so Storm’s constant withstanding just draws him in deeper. Their friendship is one thing keeping him from going crazy, until one night…

The club is regrouping and rebuilding from the mayhem known as the Russian Mafia. A hit is ordered on Tatiana, Storm, Winter, and Piper.

Braxxon is out of reach while he helps Greg Cage deal with some dirty business.

Bloodshed… Secrets… Betrayal… Trauma… Welcome back to the Breakneck world.