Hello Lovelies, here is a Feline Shifter series for all my Kitty-Cat shifter lovers.

I am reading Savage Hunger by Terry Spear and can not believe I have not read any of her books before.  I have seen and flipped through her wolf series books many times at Barnes & Noble but never bought one.  I am enjoying her writing voice.  Savage Hunger is breathtaking with her desciptive writing especially when Connor and his sister are in their Jaguar cat form.  You can tell Terry Spear takes the time to research what she writes about. Even though this is a paranormal romance she makes it feel so real. To me it has a feel of Christine Feehan, Leopard series, which I love.  Connor so far is not super Alpha like Christine Heroes, but does show a little bit of alpha attitude half way through. Her writing style is more like Christine with the beautiful descriptions. I tend to like my heroes alpha in your face but Terry has a way of writing where Connor has alpha attitude but not in your face. Especially when she was hurt, showering in the falls in the jungle. He would not let her do it herself, afraid she would slip and hurt herself more, so he  undresses her and washes her hair and body. Will have to read to find out what happens.  I felt like he was undressing and washing me....*giggles*. As for the sex scenes I have only came across one so far and it is sweet but still hot.  Loving the sexy cvovers! 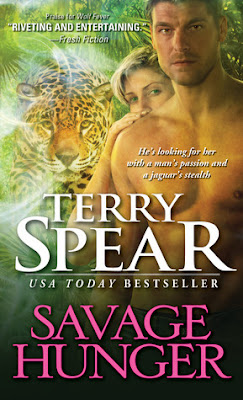 Savage Hunger (Heart of the Jaguar #1)
by Terry Spear

Blurb:
Kathleen McKnight is on a dangerous mission to help her army team take down a drug lord. She's a tough as nails recruit, but when she's caught in the crossfire, she has to rely on a mysterious man to save her. She has no idea that he has big plans for her...

Connor Anderson is a jaguar shifter who is looking for his mate. When he rescues Kathleen in the jungle-twice--he can't help but be intrigued. Will a bite or a scratch turn Kathleen into the perfect jaguar mate? 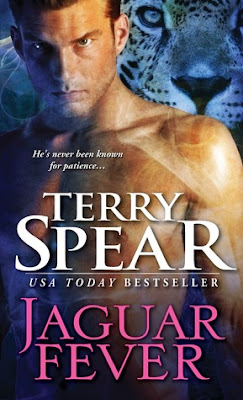