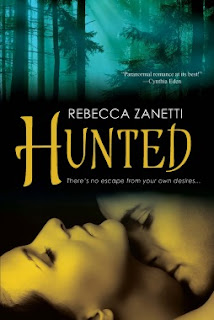 Synopsis by Goodreads
"Moira Dunne is a witch- the quantum physics kind. Time and space are her playthings. Which might explain why her one-night stand from a hundred years ago has turned up to claim her- and request her family's assistance with the war he's brewing. But the more he learns about Connlan Kayrs, the more she comes to think this is normal behavior for him."-- provided by publisher

Rebecca Zanetti has a way of teasing her fans with delicious couples you can not wait for their novel. She outdid herself with Conn and Moira. In Claimed she teased us with some spotlights on them that I was a little nervous going into reading their story in Hunted. I have been disappointed in other novels with couples I could not wait for their stories from authors I adore, this was not the case for Conn and Moira. Absolutely loved every minute with them.
Conn, adore him since the beginning of the series. Loved him more in Claimed when he made it a point to tell Moira he is done waiting and is coming for her. He definitely got my attention more in Hunted with his stubborn, over protective, dominate, possessive, Alpha male attitude.


Moira, I just adored her feisty attitude and love how she has no problems putting Conn in his place. She thinks that he marked her on purpose so their families can be alliance. Even though she is strong will, it still broke my heart at times when she thought Conn took power over her. She waited and hoped he would of come back sooner than he was suppose to.
The sexual tension is through the roof and their chemistry is hot. They are perfect for each other in and out of the bedroom. A lot of misunderstandings with them as he thinks she just needed space and she thought he did not love her. All he wants is for her to be safe, happy and take a chance on him. He has called her Dailtin (brat in Gaelic terms) since their first meeting. Loved the back story on the first time they met, when he gave her the nickname and mated.
Loved how these badass warriors are so normal and family orientated. The feeling of a real family gets better and better through out the series. Dage the king makes pony pictures for Janie’s wall and Conn made her a real dollhouse.
Janie, Zane and Kalin grabbed my attention more in Hunted. Love how little by little I get some insight on what is going on with these characters. Love watching them grow up together and Zane is already starting to be more protective of Janie, especially when Kalin is around. Hope to get more of Zane in future novels.
As always the secondary characters play a big role in Hunted and add so much to the story. Dage, Emma, Talen and Cara never can get enough of them. Rebecca Zanetti outdid herself with the best Epilogue I believe so far in the series. Next up his another of my favorite couple Jordan and Katie. Look forward to their story in Consumed.