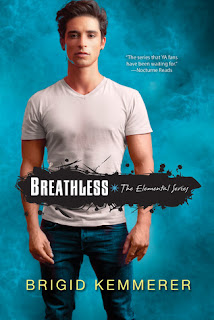 Breathless (Elemental #2.5)
by Brigid Kemmerer
Publisher:  Kensington Books
Purchase Links: Amazon Barnes & Noble﻿
Blurb by Goodreads
Too many secrets. Not enough time.Nick Merrick is supposed to be the level-headed one. The peacemaker. Since it’s just him and his three hotheaded brothers against the world, that’s a survival tactic.

But now he’s got problems even his brothers can’t help him survive.

His so-called girlfriend, Quinn, is going quick as mercury from daring to crazy. Meanwhile, Quinn’s dancer friend Adam is throwing Nick off balance, forcing him to recognize a truth he’d rather shove back into the dark.

He can feel it—-the atmosphere is sizzling. Danger is on the way. But whatever happens next, Nick is starting to find out that sometimes nothing you do can keep the peace.

One of the things I love about Brigid Kemmerer Elemental series is that she writes about characters with everyday real life issues. Kudos and a huge Thank You to Brigid Kemmerer for having a teen hero dealing with his sexuality.
Nick has never had a problem getting a girlfriend and is quite the ladies man, but the spark is not there when he kisses or touches a girl. He meets his girlfriends dance partner Adam who pushes him over the edge with dealing with his sexuality which he thought he had buried.
Adam knows what he wants and it is Nick. Loved Adams character and thought he is a perfect match for Nick. He is pushy and that is what Nick needed to bring out his sexuality. They have great chemistry and their kiss will get your heart pounding and stomach all tingly.
Quinn has serious family issues. Her mother is mean to her and makes is clear she favors Quinn’s older brother. Her brother is just as mean always making comments about her weight. The only way she knows to deal with her anger is getting mouthy with others and she finds comfort with food. She never thinks before she does anything which can lead her in a bad situation.
Brigid Kemmerer fans you are not going to want to miss this addition in the Elemental series. Breathless was a nice little set up for what is in store for Nick’s story in Secret (Elemental #4), Jan. 28, 2014. I have a feeling it is going to be an intense read with Nick trying to hide his sexuality from his brothers and Quinn doing crazy stuff before thinking. I can not wait to see how it all plays out.


ARC provided by publisher, Kensington Books at NetGalley for an honest review.