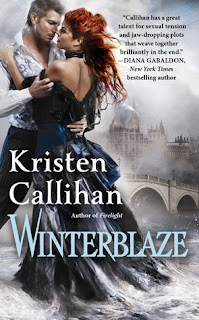 Poppy Lane is keeping secrets. Her powerful gift has earned her membership in the Society for the Suppression of Supernaturals, but she must keep both her ability and her alliance with the Society from her husband, Winston. Yet when Winston is brutally attacked by a werewolf, Poppy's secrets are revealed, leaving Winston's trust in her as broken as his body. Now Poppy will do anything to win back his affections...

Their relationship is now put to the ultimate test...

Winston Lane soon regains his physical strength but his face and heart still bear the scars of the vicious attack. Drawn into the darkest depths of London, Winston must fight an evil demon that wants to take away the last hope of reconciliation with his wife. As a former police inspector, Winston has intelligence and logic on his side. But it will take the strength of Poppy's love for him to defeat the forces that threaten to tear them apart.

Kristen Callihan has a beautiful writing voice that sucks you into the amazing world she has built with great characters. Love all the covers in The Darkest London series as they are all beautiful and eye catching
Winterblaze starts off with a lot of angst between Poppy and Winston. He is left broken after a terrible incident in Moonglow and felt betrayed by a secret that Poppy has been hiding. But he also has a huge secret of his own and it comes to bite him in the butt when he really does not need it to come out. His marriage is already in turnmoil and having this secret that he kept from Poppy is the worse. Loved the twist towards the end with Jack and the epilogue. Look forward to his story in Shadow dance (Darkest London #4) due out Dec. 17, 2013.
ARC provided by publisher Forever at NetGalley for an honest review.