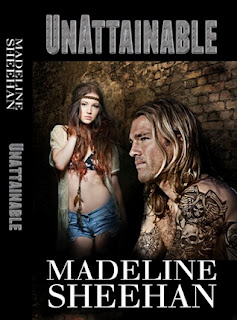 ﻿Unattainable (Undeniable #3)
by Madeline Sheehan
Purchase Links: Amazon  Barnes & Noble
Blurb by Goodreads
Warning: This is not a virtuous and tender love story. It’s chaotic, ruthless, and tragic. This story takes love and kills its innocence, steals away the pure moments, and crushes the hearts of the broken. A story born in childhood, tying one girl to one boy, leads to a destructive path—that hurts more than it doesn’t, that shatters more than it heals—testing the love that binds the two through a lifetime.

Tegen Matthews is the daughter of Dorothy Kelley, a club whore in the Hell’s Horsemen. A plain little girl, Tegen falls into the gritty world of the motorcycle club. When she meets a sweet, caring boy, she embraces the warmth and affection he shows her. Cage West is the son of the president of the Hell’s Horsemen. Tall and blond with deep brown eyes, as he grows up Cage realizes the power of his dimpled smile and smooth drawl. With one chance encounter, Tegen becomes forever tied to Cage. Following is a wayward journey that is filled with regrets, mistakes, and heartache, pulling at the threads that hold them together. Cage and Tegen fight hard but love harder, and in the end, what matters is where the journey takes one girl and one boy, who have been twined with one another since the beginning.

This is Tegen and Cage’s story.

Love doesn’t erase a broken heart, and it sure doesn’t change people. But no matter how old, how flimsy, how frayed the rope of love is, it keeps you tethered to the people you love.

I could not wait to dive into Cage and Tegan story but to be honest their story really did not do it for me till ZZ was a part of it. After awhile Tegan started to get on my nerves. She has a lot of anger towards Cage and I get it but she did need to take it down a notch at times. There was a lot of Angst between them but felt like all they did is fight, have steamy-cold-shower-sex. But towards the end I get that is what their relationship is like.
Who would of guessed the side story of Michael "Dirty" and Ellie stole the show.
Never really gave Dirty a second thought in earlier novels. After all, he does not think twice about hygiene and that is how he got his name "Dirty".  In earlier novels he is dark and twisted. Finding out about his past and what makes him the way he is now with layers slowly peeling away in Unattainable was well done. Totally fell in love with his character and his scenes at time were brutal and some even broke my heart. At the beginning I was not sure where their story was going. I could not swipe my Kindle fast enough to see if they will get their HEA. I do hope they get their own story and will not always be a side story like how Kami and Cox were in Undeniable #1. I feel like there is so much more to their story.
Perfect set up for Hawk, Dorothy and Jase book next up in UnBeloved (Undeniable #4). Look forward to see how their story plays out.
ZZ and Dirty saved UnAttainable for me from a 3 star - Liked It novel to a 4 stars - Loved it. Now as for ZZ....Wow did not see that one coming with his action. No.. ZZ what have you done! I am curious how Madeline Sheehan is going to pull off his story. I am so excited his story is not too far away in Undying (Undeniable #5).  I am sure it is going to be a hit after all Madeline Sheehan is an amazing author that was able to turn a Never-thought-of-twice character Michael "Dirty" into a crushing character. Brilliant Madeline...just freakin brilliant.
Add To Goodreads