Quote-Tastic: The Proposition by Jennifer Lyon 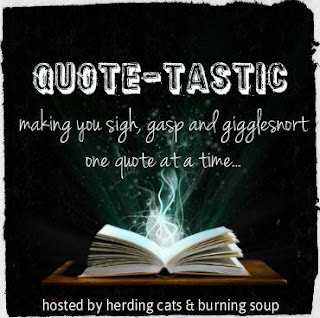 
Loved The Proposition. I have the hawts for sexy ex-MC fighter Sloane. She has panic attacks (not over dramatic attacks that go on for ever), due to a bad incident from her past. Sloane is teaching her to fight back and protect her self.  While they are training if it is too much and do not want to go any further she either has to say stop or tap out. Tap anywhere on him 3 times and he will know to stop.  In this scene they are getting hot and heavy in the gym on the break room table. I love that he thinks of her first and does not push her and is very blunt with his naughty mouth about what  is going to happen next. Sorry lovelies must read to see what they are doing on the table and if she taps out. 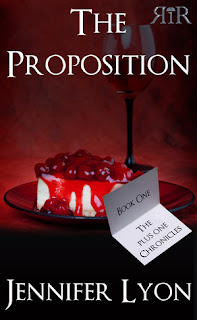 "I won't stop, Kat. I'll rip these pants off you and lick you until you're screaming. And then I'll fuck you right here on the table in the gym." He closed his eyes, straining. Then opened them. "Tap goddammit."

The Proposition (The Plus One Chronicles #1)
by Jennifer Lyon

Add To Goodreads
Rich, sexy and volatile, Sloane Michaels has a dark agenda that keeps his heart on ice. His extreme wealth gives him the control he craves and his skills as an ex UFC fighter the tools he’ll need to extract his ultimate revenge. But when the woman he never believed he’d see again crosses his path, Sloane is caught between the vengeance he needs and a sexual conquest he craves.

Kat Thayne has been in survival mode for six years, hiding behind the sweet creations for her bakery. But when a random carjacking brings her face-to-face with her darkest fears and hottest fantasy, Kat is forced out of hiding and offered a dangerously passionate proposition. One she knows she isn’t strong enough to refuse.