18 & Over Book Blogger Follow is a weekly feature that begins on Fridays and runs through the weekend, hosted by Crystal from Reading Between The Wines. This is a Friday blog hop with the objective to find and visit other book blogs that share the same interest as you, namely books geared towards the 18 & over crowd, and make some new friends!

Question of the Week: What's your favorite way to beat the heat? With a light and humorous romance? A book set in the chilly north or maybe a Christmas in July special? Or is hotter better, do you crank up the heat with a sexy romance? 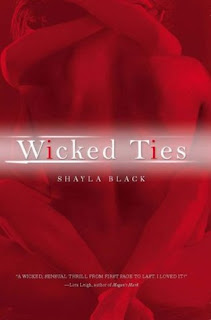 Though Jack is a bodyguard, Morgan feels anything but safe in his presence. Because slowly and seductively, Jack is bringing her deepest fantasies to the surface. And when he bends her to his will, what's more shocking than her surrender is how much she enjoys it and how she starts to crave his masterful touch. A willing player in Jack's games, Morgan knows that his motives aren't pure, but she has no idea how personal they are...
﻿
Posted by JoLee @ Wickedly Delicious Book Blog
Email ThisBlogThis!Share to TwitterShare to FacebookShare to Pinterest
Labels: 18 and Over Book Blog Follow, Erotic Romance, Shayla Black