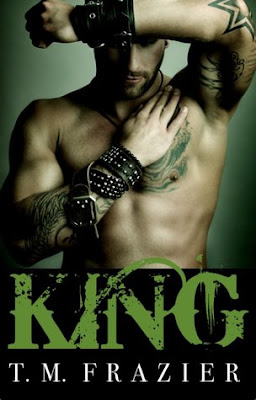 Doe has no memories of who she is or where she comes from.

A notorious career criminal just released from prison, King is someone you don’t want to cross unless you’re prepared to pay him back in blood, sweat, pu$$y or a combination of all three.

King’s future hangs in the balance. Doe’s is written in her past. When they come crashing together, they will have to learn that sometimes in order to hold on, you have to first let go.


Warning: This book contains graphic violence, consensual and nonconsensual sex, drug use, abuse, and other taboo subjects and adult subject matter. Although originally slated to be a standalone, KING is now a two part series.

Spoil Free Review
Bummer King did not work out for me. I was all in for a Dark Read. Did not start out that way and was not really getting into King the hero. But darn it  T.M. Frazier got me hooked and was gradually liking him. Even though I was in the mood for a Dark read and for it not going in that direction I was enjoying it and could not swipe my kindle fast enough. King was moody and sexy all at the same time. The sexual tension and dirty talk was good and I loved his hot and cold moments towards Doe the heroine. His character was so unpredictable. But one thing that was given he would do anything even kill if anybody hurt someone he cared for.  Love seeing the good, gentle and badass side to his character. As for the plot I had to know who Doe was? Would she find out? Nice twist with that as I never guessed it.
The secondary characters Preppy and Bear. Loved them as they had their own  voice and personalities. Preppy added so much interest in the story but never over took it. His tatted up body- button up shirt-bow tie-suspender wearing smartass character was odd, sexy and refreshing.
Now for the bad. The flow of the book was terrible. The book took a huge turn around and out of the blue it became dark. Again I was in the mood for a dark read but the execution of this was so off. Three major incidents that were shocker moments felt like they were just thrown in the story. Not flushed out at all.  There were no after affects. I did not even get a chance to let anything sink in to what the fuck just happened  and became disconnected from the characters.  Especially King his actions were so off during these incidents hated him after the first incident and lost respect for him on the second incident.
The ending was good. But the damaged has been done and already lost my connections with the characters.