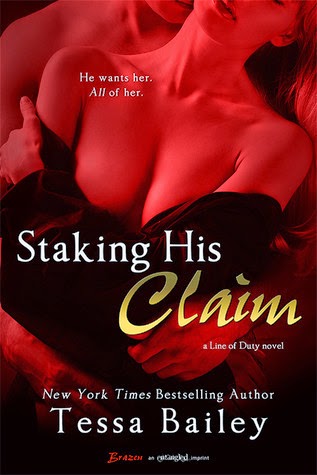 Staking His Claim (Line Of Duty #5)
by Tessa Bailey
Synopsis
He wants her. All of her.

NYPD sniper Matt Donovan is in Hell. Instead of driving his best friend’s little sister home from college, he’s stuck with her roommate—a fresh-faced ray-of-sunshine with a body that makes grown men weep. There’s no way he’ll allow himself to taint the little vixen, no matter how hard she tries to tempt him, so he resigns himself to the longest—and hardest—drive of his life.

Matt’s obvious attraction suits grad student Lucy Mason just fine. She had no idea her brother’s best friend was so deliciously hot. Knowing he’d never have his wicked way with his buddy’s sister, she lies about her identity and seduces him. But Matt’s no fumbling college boy. His desires run deep—and dark—and he wants to teach Lucy what wicked really means.

Matt’s demanding appetites only make Lucy want more. But when her cover's blown, he’s furious—even as his hunger for her becomes insatiable. Matt can’t trust anyone, least of all himself. And he knows all too well that darkness always destroys the light…

Rating: 3 Stars - Liked It
Genre: Contemporary Romance
Heat: Hot Fan Yourself
I had such high expectations for Staking His Claim especially after it started out so promising with a delicious  Matt.
"I want to pleasure your sick little body. I want to make you scream and shake and lose your fucking mind."
"But before that, I want to erase any doubt as to who is about to take ownership of you, good girl. Have I scared the hell out of you yet?"
Matt was still delicious and loved his dirty talking mouth. He did not want to sleep with Lucy because he was afraid of unleashing his dark side. This is where I had problems with the novel he not once unleashes is dark side only spankings. I do not really consider that dark. The sex scenes are still well written and hot but I was expecting a little bit more on the kinkier side.
I love the whole best friend little sister theme. But again I had a problem with this. I did not mind the sneaking around it kept me on edge of when and how  Brent (Asking For Trouble) who is Lucy big brother finds out. Huge let down on how he found out and his actions. I felt it was rushed in the storyline and wanted that played out a little bit more.

It might seem that the novel was more of an Ok read than a Liked it Read by my review. Overall it was still an enjoyable read. I just had 2 major issues but still those issues play a big part of the novel. I think this is a good read for readers who have yet dived into more kinkier books. Tessa Bailey is still one of my top favorite authors who I will buy anything she writes.
Add To Goodreads
Purchase Link: Amazon
Posted by JoLee @ Wickedly Delicious Book Blog
Email ThisBlogThis!Share to TwitterShare to FacebookShare to Pinterest
Labels: 3 Stars, Alpha Male, Contemporary Romance, Dirty Talker, Line Of Duty Series, Reviews, Tessa Bailey