Review: The Dom Who Loved Me by Lexi Blake 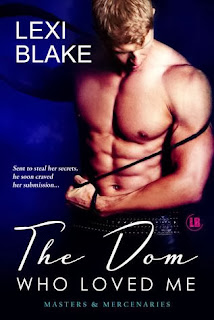 Sean Taggart is hunting a deadly terrorist, and his only lead is the lovely Grace Hawthorne. She's the executive assistant for an employment agency Sean suspects is a front for illegal activities. To get the truth, he is going to have to get very close to Grace, a task he is all too eager to undertake when he discovers her deliciously submissive nature.

…turns into a dangerous seduction.

Soon, Grace Hawthorne is living a double life. By day, she is the widowed mother of two college-aged sons. By night, she submits to Sean's every dark desire. She's living out her wildest fantasies of pleasure—intimate acts of trust she's only read about. As passion engulfs her, a murderer strikes, and Grace learns that Sean has a deeply hidden agenda. Will Sean choose his mission and break her heart or be the Master of her dreams?

Spoil Free Review
I was excited to start the Masters and Mercenaries series as I heard this series is like Cherise Sinclair's Masters Of The Shadowlands series and Shayla Black's Wicked Lovers Series.  So if loved those series then would like this series. No for me The Dom Who Loved Me the first in the Masters and Mercenaries is nothing like Masters Of Shadowlands  or Wicked Lovers Series. The only thing in common with both series is the BDSM and D/s theme. The hero Sean and writing style does not even come close to both series.
The novel started out good and was enjoying getting to know all the characters was even crushing on Sean. Right away he had an alpha male attitude and was not over the top. I actually enjoyed up until after the sexy pool scene that was hot and showed readers how he can lose his control when it comes to Grace. The Novel for me really started going down hill when Sean and Grace started their D/s fling. As individual characters I loved them. Grace character is caring and put others first before her own needs. She at times can be insincere as she is 40 and Sean is a hunk who is 8 years younger than her. Her character felt real as I can see where some of her insincerities would be when coming to him being interested in her. I loved that Sean was possessive and jealous when it came to Grace. And at times did love his dirty talking mouth.  But once there relationship started I felt disconnected with them. I love my D/s and BDSM reads but I need to feel that there is more than just harsh commands as "do this" and "do that".  I needed with Sean to be more caressing and caring to Grace during their intimate scenes. That being this I felt the sex scenes were not scorcher-panty-changer scenes. To me they came off more steamy-cold-shower needed.  The huge turn off for me was the insta love, at that moment was about ready to call it quits. They slept together twice and already both said I Love You to each other. There was no build up to them falling in love with each other.
Quite a few times was ready to call this novel quits. The only reason I stuck it out, I was curious to see when and  how she was going to react about him being undercover. And what was going on with the plot about his team being undercover. I enjoyed the outcome of when she found out and her actions. So was hoping the novel would get better from there but no it actually got worse.
Love the idea of a BDSM theme mixed with a suspenseful plot. For me the best parts were with the secondary characters and the actual suspenseful plot. Another reason I kept reading was for the secondary characters as I enjoyed them all.  They all have their own voice and loved reading when any of the team were together. Adam and Jake were a hoot together while being under cover.  Loved the brotherly love between Sean and his brother Ian. Loved there talks and banter. Any scene with Sean, Liam or Adam were very good. I did enjoy that the novel was unpredictable. Rating 2 stars- OK instead of 3 stars- Liked it because I really had a hard time connecting with Sean and Grace as a D/s couple.  Even though I loved the suspenseful plot and secondary characters I really did not like how the writing was for the D/s and BDSM theme and a few times ready to call it quits on this book.
The epilogue I was not a fan of, Grace and Sean do have a HEA. It was ok as it does set up for the next novel who I believe will be Adam and Jake story. Enjoyed their characters but not sure at this moment if I will continue the series or try any other novels. I think if I could of at times even connected with Grace and Sean as a couple I would most likely try book 2 in this series.