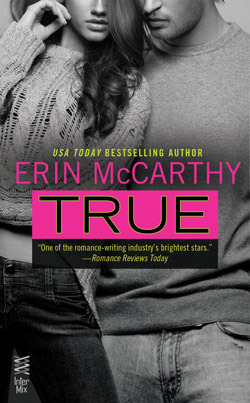 When Rory Macintosh’s roommates find out that their studious and shy friend has never been with a guy, they decide that, as an act of kindness they’ll help her lose her virginity by hiring confident, tattooed bad boy Tyler Mann to do the job…unbeknownst to Rory.

Tyler knows he’s not good enough for Rory. She’s smart, doctor smart, while he’s barely scraping by at his EMT program, hoping to pull his younger brothers out of the hell their druggy mother has left them in. But he can’t resist taking up her roommates on an opportunity to get to know her better. There’s something about her honesty that keeps him coming back when he knows he shouldn’t…

Torn between common sense and desire, the two find themselves caught up in a passionate relationship. But when Tyler’s broken family threatens to destroy his future, and hers, Rory will need to decide whether to cut her ties to his risky world or follow her heart, no matter what the cost…

The blurb for True automatically caught my attention with  friends hiring a tattoo bad boy to help their friend Rory lose her virginity with out her knowing. To me this screamed lies and betrayal and usually with that kind of mixture get an intense read. To my disappointment that did not happen.

The books started off with me already disliking Rory and her girlfriends. The inner thoughts going through Rory head while almost getting raped and the fact that her girlfriends did not even go back to the dorm with her to comfort her was a big turn off. Before all this Rory annoyed to me no end with her negative inner thinking about herself and everything around her. I guess I should of known I was not going to like her friends I mean after all what kind of best friends would hire someone to take away another friend virginity. I get she is insecure and had almost everyone crap on her, whole entire life. But she did not grow with the novel.

Tyler was okay nothing to swoon over.  Yes he said the right things that were sweet but where was that tatted up bad boy. Yes he loved his brothers and tried his hardest to take care of them since their home life really sucked. Yes he is pierced down below and that is sexy but the outcome of the sex scenes were boring and nothing to get all hot and bothered about. Do not get me wrong I have read many NA novels that have somewhat lacked in the sex department but at least the sexual tension was hot enough or the plot execution was good to at least outcome the bad sexing. There was no build up or sexual tension.

As the story progress it dealt with a lot of real issues lies, betrayal, drug addiction, almost rape. But the outcome for all was rushed and unbelievable. I did not get to feel their pain and heart ache. I will admit I did feel a little for Tyler when he brought Rory home to deal with his drug addict mother. He did break my heart when he was trying to comfort his mom and the terrible things she said to his younger brother who has Down Syndrome, but then it was rushed.

I almost did not finish at 50% when Grant who almost rapes Rory wants to apologize and everyone is okay with it even Tyler. I was so disappointed by the outcome when Rory found out about her friends paying Tyler to sleep with her. Because of this I  needed to find out how, when and reactions were going to be like when Tyler finds out Rory knows. A another huge disappointment. The ending was also rushed.

True should of had some angst and drama with all the issues it had going on but the execution for all was poorly done. For me when reading a NA story that is going to have real issues I need the angst and drama that comes along with it,  sadly this series is not for me