Review: All The Pretty Lies by M. Leighton 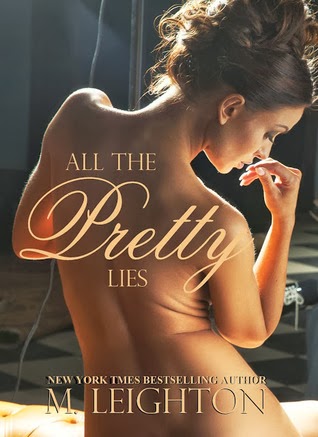 Her…Sloane Locke has led a sheltered life. However, with a history like hers, she can understand why her brothers and her father want so much to protect her. She has gone along with it for twenty long years, but those days are over. For the girl who never makes promises, Sloane has made a pact with herself that things will change on her twenty-first birthday. So when the clock strikes midnight, Sloane strikes out to spread her wings and break a few rules.

Him…In addition to inking skin, Hemi Spencer possesses many talents. Controlling himself has never been one of them. It’s never had to be. He’s lived a life of indulgence for as long as he can remember. Right up until tragedy struck. Now, he’s nothing but controlled. He’s a man on a mission, one who will let nothing and no one stand in his way.

Them…
Nothing in their lives could’ve prepared Sloane and Hemi for what they’d find in each other—distraction and obsession, love and possession. But the one thing they can’t find is a future. Neither one has been totally honest. And they’ll soon learn that the devil is in the details. In the details and in the lies.
How far will two people go to live in the now when the now is all they’ve got?

Spoil Free Review
I have come to learn that when I read a M. Leighton novel I am going to get a story  with lovable characters that have secrets. And with those secrets I never know what they are or when they will be revealed until it is time for them to be revealed and fall nicely in the novel.
As for Sloane the heroine her secret I pretty much had an idea of what it was. It made sense why she wanted to spread her wings and live life in the moment. It was the reason why her brothers and dad were over protective of her. It was believable and made me love her character more. I enjoyed that she had a backbone and knew when to speak up with her family and knew when to let some things go.
As for her brothers and dad, I fell in love with them in the beginning and fell harder for them through out the novel. They all have Alpha Male attitudes when it comes to their sister and daughter. They are extremely over protective but also understanding and sweet. All the moments with her through out the novel are believable not just bunch of over bearing alpha male characters throwing orders around. I really grew to adore her father more especially after his talk with her about Hemi.
Now Hemi's secret I had many scenario's running through my head and wow was I surprise none came close to what is was. The moment Sloane walked into the Tattoo Sop and got caught checking him out I was already liking his character. Innocent Sloane is a distraction he does not need at this moment in his life. He has only been with experienced lovers and they all know to be out by the time he gets out of the bathroom. He is not "the breakfast kind of guy".  He finds it harder and harder to keep himself in control when he is around Sloane.
"But nothing. For tonight, I'll be the good guy you need me to be. Whether you know you need it or not. I'm asking you to leave, Sloane. But I promise you-promise you-that if you so much as darken my doorway again, I won't let you walk back out again."
Right along with Sloane I fell harder and harder for sexy wearing 501 button fly jeans Hemi and his tatted up-pierce brow-1969 Camaro driving-jealous-possessive-alpha male attitude. Love that their friendship builds into a romance there is no intsa love. His jealous and possessive moments are gradually done through out the novel where fit the scenes. There is no angst but they do have their ups and down moments. I am not always a huge fan of virgin heroines because lately it seems to be the trend to have a virgin heroine who is clumsy. That was not the case here. Sloane is a virgin and not clumsy, but being raised with her over protective family and since been caged in all her life she really does not have a lot of dating experience. She  knows what she wants and she wants Hemi. She is not one to shy away when it comes to getting what she wants. Their sexual tension and love making scenes are fan your self hot with a dirty talking hero. M. Leighton did a beautiful but yet sexy job on their first love scene.  Loved that they were playful and she knew how to get him hot and bothered and vice versa. The best parts for me was there were a lot of first moments for both of them.

So much sexiness going on in ATPL that is written well with delicious detailed description's. I felt every touch and every tattoo being inked. I want a tattoo artist, Hemi for my very own. Love that this is a series and Reese who is Hemi's brother is up next in All the Pretty Poses (Pretty #2) . Curious about his brothers since we got more on her family and not enough on his. I am interested to see what his family is like.