Love a bad boy in a popular rock band. Have had this on my wishlist for awhile. 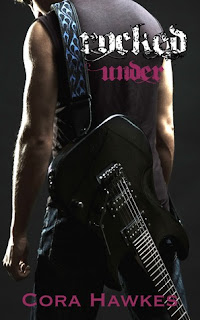 Rocked Under (Rocked #1)
by Cora Hawkes
New Adult
Blurb By Goodreads
Falling in love isn't always easy or pleasant. The intense and angst-filled story of Emma and Scott is a painful, gut-wrenching and exhausting portrayal of how hard it can be to let go...

Picking up the pieces and starting again in the US, Emma enrols in college with her cousin, Ashley. She is finally free to do what she wants and live how she chooses, and no man will ever rule her decisions or emotions again.

That is, until Scott Mason walks on stage...

Intense bad boy Scott is the lead singer of a popular local rock band. A ladies’ man and Ashley's long-time friend, Scott holds an instant fascination for Emma — she finds herself drawn to him, even though he represents everything she hates and needs to stay away from in a guy. He treats females like he does a cigarette — light it, use it, and lose it.

For her cousin's sake, Emma makes an effort to get along with Scott, but she soon discovers that there is more to him than first appears, making him even more dangerous in her eyes. Behind the façade of friendship, jealousy, obsession, fear and insecurity fester — an internal battle rages as she fights her attraction and does everything she can to stop history from repeating itself.

One thing she knows for sure is that if she breaks her rule, it may destroy her.