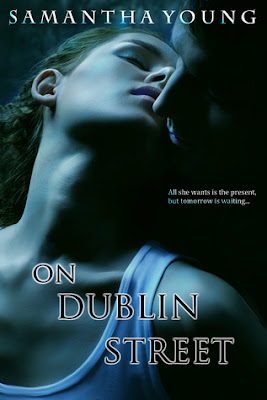 Blurb by Goodreads
Jocelyn Butler has been hiding from her past for years. But all her secrets are about to be laid bare…

Four years ago, Jocelyn left her tragic past behind in the States and started over in Scotland, burying her grief, ignoring her demons, and forging ahead without attachments. Her solitary life is working well—until she moves into a new apartment on Dublin Street where she meets a man who shakes her carefully guarded world to its core.

Braden Carmichael is used to getting what he wants, and he’s determined to get Jocelyn into his bed. Knowing how skittish she is about entering a relationship, Braden proposes an arrangement that will satisfy their intense attraction without any strings attached.

But after an intrigued Jocelyn accepts, she realizes that Braden won’t be satisfied with just mind-blowing passion. The stubborn Scotsman is intent on truly knowing her… down to the very soul.

On Dublin Street starts off very slow and too descriptive of everything Joss is doing and seeing. I could of done without her room mate giving her a full tour of the apartment right at the beginning. I was not big on Joss going to and from places with every street name she was on. Was about to give up like 40 percent into the novel when she was going on break from work with every detail on what was in the break room but stuck it out and that is when it started to get a little better. That is when finally Joss and Braden actually started something.
Joss has serious commitment issues. Does not allow any body in. While all along her new friends are trying to get close with her. She has tons of panic attacks that seem to be caused because she never really dealt with her parents, sister and best friend death from the past. Never once felt her pain from the loss of her family. At one point Braden needs her more than ever and she closes up on him. That broke my heart and dislike her more.
Braden did not feel his character in the beginning. All I knew of him was from what Joss thinks of him and that is cocky, arrogant and hot. Supposedly he is obsessed and wants Joss but never got that feeling. There was no sexual tension or any build up between the two. Out of the blue we finally get to see what Braden is like when he gets ticked off because she has some guy kissing her in the bar she works at while he was there. She goes on break and whoa he is all of sudden possessive, jealous with an alpha male attitude. He knows she does not want a relationship so he settles for sex with no strings attach and a few nights accompany him on work dinner dates. Once they were together at times sparks did fly. Loved how he was able to get her to open up about her family and they had some playful times. Loved how he was dominate in the bedroom, sex scenes were hot and he is a yummy dirty talker in and out of the bedroom. When they were finally together I did love the Ups and Downs with there relationship, at times felt there pain and happiness.
For me I could not connect with the characters at the beginning, the writing was a bit flat, never felt what the characters were feeling and was very easy to put down. Almost the first half of the book is Joss interacting with her new room mate, therapist, her friend from back home. Not a lot interaction with Braden. But after about 40 percent it does get better and was hard to put my kindle down. The writing was more alive and was able at times to feel the characters pain and happiness. It starts off as a 2 star Ok novel but ending up Liking it 3 stars.