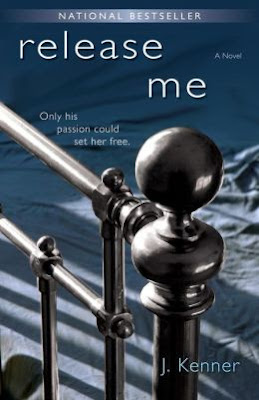 Damien Stark could have his way with any woman. He was sexy, confident, and commanding: Anything he wanted, he got. And what he wanted was me.

Our attraction was unmistakable, almost beyond control, but as much as I ached to be his, I feared the pressures of his demands. Submitting to Damien meant I had to bare the darkest truth about my past—and risk breaking us apart.

But Damien was haunted, too. And as our passion came to obsess us both, his secrets threatened to destroy him—and us—forever.

Release Me takes you on a journey of wounded characters that do not realize they are the only ones that can heal each other. Damien is a wealthy hero who is intense with serious control issues. He has to control everything from his work to his lovers. He is very secretive and does not open up to anyone about his past. I loved how Nikki was able to get him to open up about his past with his father. But I still feel like there is more there and did not get all the story just what Nikki assumes. I love a good dirty talker and he was good at it but I felt it was too much at once. So much of “I am going to do this”, then “I am going to this” and so on. He would tell her more than 5 things he wants to do to her at once almost every time he talked dirty to her.
Nikki was too wishy washy for me. Over and over she wants him but then she can not be with him. She has been controlled all her life by her mother. She has serious issues with cutting her self and I really wanted to feel her pain but for me the writing was flat and was really not there.
I could not connect with the characters. It takes way too long before anything really happens with them. Each scene drags out especially the beginning with the Party. About 50% into the story is when he finally decides he wants her to pose nude for a painting for him and he will pay her but only if she will be his in the bedroom. That is when they finally actually have any sexual intercourse and it was OK. Even though there is light BDSM, spanking and back door activity for me though it did not get my girly bits tingly.
It does not really end in a cliffhanger but a comment is made by another character that makes sense of something that had happened in the beginning and was not sure why this certain thing happened. But it has left me curious. So many times I felt like I was missing something in the novel. Things will be done or said and have no clue why. Later find some things out but then will leave other things open. Damien has many secrets and I am dying to know if what this character says is true so I am curious enough to read Claim Me (Stark Trilogy #2) only if it goes on sale. I can not see paying $9.99 for a novel that I only rate as a 2 star - Ok read. This series has potential to be a emotional and intense read.
ARC provided by NetGalley for an honest review