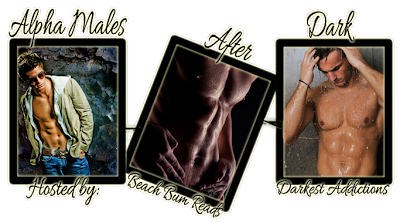 Alpha-Males After Dark is a weekly meme hosted on Monday's (After hours) by Ana @ Beach Bum Reads and Neyra here @ Darkest Addictions. Alpha-Males After Dark is an 18+ meme that has your favorite smutty scene from a book of your choice with your favorite Sezzy Alpha-Male. Following this, you will state why you chose said Sezzy Alpha-Male and that particular hawt & heavy scene. Your post can be as explicit or as conservative as you want. Just spill the deets, you know we will ;)

To join in on all the steamy fun all you have to do is head on over to their sites, link back up in the link section below and be a follower of both Beach Bum Reads & Darkest Addictions. Have fun! ;) 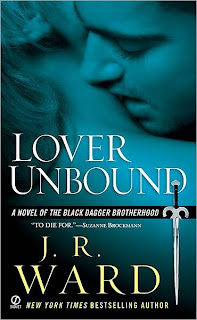 With  no warning at all she was tackled from behind, pushed face-first into the wall and held in place by a rock-hard body twice the size of her own. Her gasp was first one of shock, then one of sex as she felt V grind into her ass.

"I tried to tell you no," he growled as his hand buried itself in her hair and locked on, pulling her head back. As she cried out she ran wet between her legs. "Tried to be nice."

"Praying's not going to help. Too late for that, Jane."

"Shh." He cranked her head to the side with a twist of his wrist, exposing her throat. "When I want you to beg, I'll tell you." His tongue was warm and wet as it rode up her neck. "Now ask me what I'm going to do to you."
~~~~~~~~~~~~~~~~~~~~~~~~~~~~~
Why:
Now this my kind of meme. I am sure you are suprised I did not pick my all time favorite author Lora Leigh, who writes the best Alpha Males out there. My first picked for this meme had to go to V in Lover Unbound by J.R. Ward. She has given us some yummy Alpha Male heroes and V is my favorite. That BDB warrior rocks my world.