Lusting For Covers: Beneath Blood And Bone By Madeline Sheehan And Claire C. Riley

Lusting for Covers is a weekly meme, held on Sunday, that allows bloggers to share their current cover obsession with fellow book lovers. This meme is hosted by TBQ @ TBQ's Book Palace. 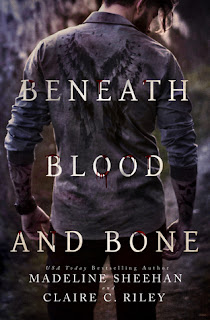 It is the end of the world…

They call him Eagle. Like the grand and beautiful animal that symbolizes freedom. And during these dark times, when humanity is full of nothing but suffering, a man with such a powerful name should be a beacon of hope.

He is anything but.

Her name is Autumn. Though she hasn’t said this name, or much of anything else, in the four years since the fall of civilization. A shell of her former self, and living wild in a cave at the bottom of a ravine, Autumn is accustomed to being alone. She prefers it actually, especially when her only other options for company are either trying to kill her, or worse, lock her up inside their walls.

Captured by Eagle’s people Autumn is suddenly thrust back into the land of the living, though she would hardly call it living. The community of Purgatory is full of sinners, the most evil of which seem to have set their sights on her.

In an act born of anger and defiance, Eagle becomes Autumn’s unexpected savior forcing these two solitary people into one another’s broken worlds. Neither knows quite what to make of the other, but one thing is certain.
To survive Purgatory, they will need to learn how to rely on each other; a feat that could quite possibly teach them how to live again.

Thoughts: Fell in love with this cover when it first came out a few years ago. Love the gritty feel with a hint of his tattoos.