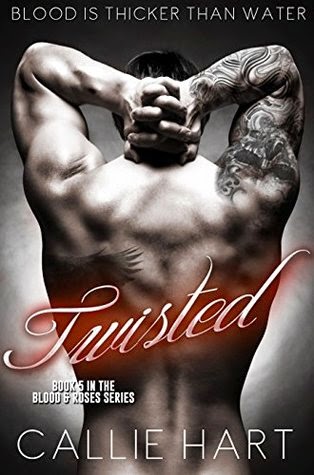 Twisted (Blood & Roses #5)
by Callie Hart
Synopsis
Twisted is book 5 in the Blood & Roses series. Make sure to check out Deviant, Fracture, Burn, and Fallen before reading this installment!

I’ve lost everything. My home, my job, my purpose in life—everything has been turned upside down. But while life hasn’t exactly turned out the way I would have liked it to, I wouldn’t change a thing. If things were different, I wouldn’t have Lacey. I wouldn’t have Michael.

But most importantly, I wouldn’t have him.

I’ve realized what I feel. He knew it before I did. Only one question remains:

Is he capable of feeling the same way?
Zeth
Secrets are a prison, and I have been behind bars for years. Sloane Romera has been turning keys in all of my locks, throwing light on corners of my mind that I thought would forever be shrouded in darkness. Or at least I had hoped would be.

I have done so many wrongs in this life, and yet this woman has forgiven me. She’s done something I never thought possible—she has learned to understand me, and she hasn’t run. She’s amazed me. She’s saved me. She’s fallen in love with me.

If it’s within my power, I’m about to do the same for her.


Callie Hart writing voice and storytelling was amazing in Twisted. I do not know how she does it but she is able to have many characters in one novel that never takes away from Zeth and Sloane story. The secondary characters have played a big roll in the Blood & Roses series since the beginning but in Twisted they all played a bigger part. Readers really get to see that Zeth, Sloane, Lacey and Michael are becoming a family. Through this crazy ride they have been on, their bond is all they have and have gotten stronger.
Shit just got real with Zeth and Sloane relationship. It was at times intense and I was not sure if Zeth was going to be able to handle certain things. Sloane fucking loved her more in Twisted. She is a strong character and all she knows is Zeth is it for her.
Twisted was a nice set up to Rebels story coming 2/9/15.  I am sure there is more coming with Rebel in Collateral (Blood & Roses #6).
Add To Goodreads
Purchase Links: Amazon