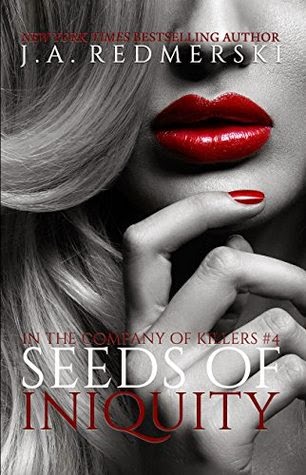 Seeds Of Iniquity (In The Company Of Killers #4)
By J.A. Redmerski
Synposis
Victor Faust’s new Order is growing. Business is good as there is no rest for the wicked in an underground world of hardcore criminals and contract killing. Relationships among the operatives have changed little over the past year—but things are about to change now, and all six high-ranking members of the new Order will be blindsided by an unlikely enemy.

Loved ones whose only ties to Victor’s organization are their relationships with its members, are abducted. The price to get them back safely—the six must confess their deepest, darkest secret to this mysterious young woman named Nora, who is as deadly as she is beautiful, and who seems to know more about each of them than they know about each other. And although no one has any clue about who Nora really is, it becomes clear that she also isn’t who she appears to be.

So much more is at stake than secrets and the lives of innocent loved ones; with each member that Nora forces to confess, the truth about their dark pasts and their present objectives will cast suspicion, pit some against each other, and may tear others apart.

Before the game is over everyone will know who this woman is and why she is here, but the damage she will leave in her wake could be the beginning of the new Order’s destruction.

Whose dark secret will be the darkest of all? And can Victor’s Order survive any of them?

Rating: 5 Stars - Amazing
Genre: Suspense/Romantic Suspense
Source: Bought
J.A. Redmerski story telling is extraordinary.  Once again she wrote an amazing novel that  I was pulled in the beginning and could not put it down.  The twist and turns were once again edge of your seat and of course some  What The Fuck just happened moments. I never knew what direction the book was going. What has been so great about this series is not one book is the same.
In the new installment in The Company Of The Killers J.A. Redmerski brought in a new character Nora. No one thinks they know her or if she is the enemy, all Victor and his operatives  know is in order to save some love ones she has abducted they all will have to  confess their deepest darkest secrets to her. Kudos to J.A. Redmerski  for writing an interesting character, Nora. Like Victor and his operatives, readers little by little get to know who Nora really is and why she did what she did. J.A. Redmerski I believe has created a character just as twisted as Fredrik.

The six high-ranking members of the new Order are Victor, Izabel, Fredrik, Niklas, Dorian and James. It amazes me how J.A. Redmerski was able to bring in all these characters in one book and still create a 5 star - Perfect Read. One would think with so many characters playing a big roll there was bound to be something missing or more time spent on a certain character. Oh no the balance with each character was well done. All character's have their own personalities and voice. They all need something to survive. Izabel needs a lot of things , but has yet to figure out what she needs most, Fredrik needs love, James needs acceptance, Dorian needs to make peace with himself, Victor needs to be in control and Niklas needs something to call his own.

The secrets were the best part of SOI. All were good and I am sure will play important roles in upcoming stories. Victor's secret killed me.  Niklas secret broke my heart. Niklas has without  doubt caught my interest.  I am excited his story will be next The Black Wolf (In the Company of Killers #5) due to be release in 2015. I look forward to his cover as I love all the covers in this series.

J.A. Redmerski has created a series that is unlike anything else. It is so hard to put a label on her series. It has a little bit of everything. Suspense, Romance, Thriller. I think she has found her writing style with this series. For me I love the way this series has been going.  She has created some awesome characters  that all have weaned their way into my heart. They are so real I feel all their happiness and pain. I believe this series needs to be read in order to truly get the feel of all the characters. J.A. Redmerski I am sure you will never read my review but if you do I am begging you to continue with Fredrik. You teased me with his part in the diner that I need to see where that is going. I need Fredrik to find love again.