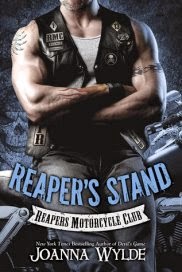 Reaper's Stand (Reapers MC #4)
by Joanna Wylde
Synopsis
As Reapers Motorcycle Club president, Reese “Picnic” Hayes has given his entire life to the club. After losing his wife, he knew he’d never love another woman. And with two daughters to raise and a club to manage, that was just fine with him. These days, Reese keeps his relationships free and easy—he definitely doesn’t want to waste his time on a glorified cleaning lady like London Armstrong.

Too bad he’s completely obsessed with her.

Besides running her own business, London’s got her junkie cousin’s daughter to look after—a more reckless than average eighteen-year-old. Sure she’s attracted to the Reapers’ president, but she’s not stupid. Reese Hayes is a criminal and a thug. But when her young cousin gets caught up with a ruthless drug cartel, Reese might be the only man who can help her. Now London has to make the hardest decision of her life—how far will she go to save her family? 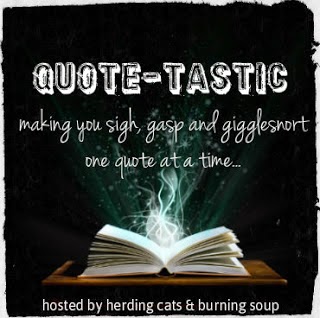 Join us every Monday and share a favorite quote that's grabbed ya for one reason or another.

Everyone's welcome to join in. Authors, bloggers, readers. The more the merrier! Herding Cats & Burning Soup.
My Quote-Tastic:
Reece and London are having a water gun fight while camping. He was suppose to count to 100 before he went after her. Well he only counted to 50, caught up to her and soaked her. She accuses him of cheating so he shoots her again.
"I counted fast," I told her smugly. "And you owe me two kisses."
She glared at me, but when I caught the back of her neck and pulled her in to claim my prize, she didn't protest. After long seconds we broke apart, gasping for air. Her wet shirt clung tightly to her tits. Outstanding.
Then she leaned forward to kiss me this time. I closed my eyes, savoring the delicate touch of her lips and---"Holy Fuck!"
Bitch shot me in the cock with her gun, point blank.
London started laughing and took off up river, shouting back at me.
"You count for real this time, asshole! Otherwise I'm taking your gun away from you."
Spoil Free Review:
Rating: 5 Stars - Amazing
Genre: Contemporary Romance
Heat: Steamy ~ Cold Shower Needed
Source: Bought
Reaper's Stand is the 4th installment to Joanna Wylde Reapers MC series and she nailed it with a mature hero/heroine. London being in her late thirties, Reece being in his early forties was refreshing. Joanna Wylde characters stayed true to their age.  Their actions in some scenes put a smile on my face because of their maturity level was right on. The sexual tension was hot with a dirty talking hunk of a man who likes to invade London's personal space. They both brought out a young and vibrant side when together. This just made their story fun and playful.
London  at times got lost in her own head, but I enjoyed it. She is a mama bear that has to take care of everyone. She understands loyalty and that family is not always about blood. She is strong will and has no issues going head to head with the Reaper's or Reece when it comes to her cousin, Jess,  who she has looked after for almost all her life. She in one way or another has been a big part of Jess life since she was born.
Reaper's Stand was an auto buy for me and could not wait to dive into it but at the same time was not sure how I was going to like it considering he is a widower. As I was reading I really did not know what to think of Reece. Loved that Heather the love of his life since high school was a part of the story. Reece needed the assurance from Heather that is was ok for him to move on. I personally needed it too. Heather moments made me laugh and even shed a tear. All said in done Joanna Wylde worked her magic and I fell hard for Reece.
Joanna Wylde writing voice amazes me with each new novel. These novels are not full blown dark, raw and gritty. This series flow's  nicely with the right amount grit when it is needed. Readers are started off with a WTF is happening to absolutely falling in love with the hero/heroine. Then Bam the raw and gritty starts and to be honest I had no idea what direction she was taking with Reece and London.
I found more humor in Reaper's Stand not only with Reece and London but with Horse and Ruger. Get Reece involved and I was giggling. Horse is such a smartass either with his victims or just joking around with Ruger.
I hope Painter gets his own story. He has been through so much in these last two novels that I need him to get his HEA. Readers get a sneak peek at Puck's character who is having his own story in a new series Silver Bastard (Silver Valley #1).  April 2015 can not come sooner.
Add To Goodreads
Purchase Links: Amazon  Barnes & Noble
Posted by JoLee @ Wickedly Delicious Book Blog
Email ThisBlogThis!Share to TwitterShare to FacebookShare to Pinterest
Labels: Alpha Male, Bikers, Contemporary Romance, Dirty Talker, Joanna Wylde, Quote Tastic Meme, Reapers MC Series, Reviews