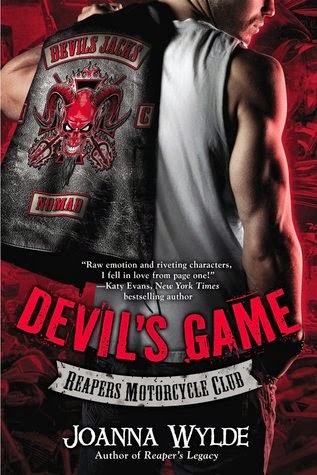 Devil's Game (Reapers MC #3)
by Joanna Wylde
Synopsis
Liam “Hunter” Blake hates the Reapers MC. Born and raised a Devil’s Jack, he knows his duty. He’ll defend his club from their oldest enemies—the Reapers—using whatever weapons he can find. But why use force when the Reapers’ president has a daughter who’s alone and vulnerable? Hunter has wanted her from the minute he saw her, and now he has an excuse to take her.

Em has lived her entire life in the shadow of the Reapers. Her overprotective father, Picnic, is the club’s president. The last time she had a boyfriend, Picnic shot him. Now the men in her life are far more interested in keeping her daddy happy than showing her a good time. Then she meets a handsome stranger—a man who isn't afraid to treat her like a real woman. One who isn't afraid of her father. His name is Liam, and he’s The One.

Or so she thinks.

Spoil Free Review
Rating: 5 Stars - Amazing
Genre: Contemporary Romance
Heat: - Hot ~ Fan Yourself
Source: Bought
What I am admiring more about Joanna Wylde  Reapers MC series is readers never know what they are in for. Each installment has been its own.
In Devil's Game readers get a younger couple. Liam “Hunter” Blake who is from Devils Jack MC and is Reapers MC enemy. Em who is the daughter of Picnic, who is the president of Reapers MC. So you know readers are in for one hell of ride with a combination like that. Joanna Wylde did not disappoint. Devil's Game starts of with a bang and never lets up.
I now can add Hunter and Em as one of my favorite couples. Right along with Horse and Marie from Reaper's Property (Reapers MC #1). Ruger and Sophie from Reaper's Legacy (Reapers MC #2). Hunter and Em chemistry was a hit from the beginning I could not swipe my kindle fast enough to see how Joanna Wylde was going to pull this off. Loved the text messages between them. It gave enough to get that New Adult feel.
I have to start with Em character because she kicked ass.  She knows how to hold her own when it comes to danger. She should since she was raised in Reapers MC. She is strong will and does not put up with anybody especially Hunter. She had no problem putting Hunter in his place when nonsense came out of his mouth. Got some giggle moments with these two.
With Em having issues of dating guys because of her dad scaring them away she really needed someone like Hunter. Hunter wants Em and he has no problem standing up to her dad and his brothers. He swooned his way into my heart. Because Reapers MC is not a nice group of brothers to reason with when it comes to their loved ones.
Joanna Wylde is auto buy for me. This is the third novel in her Reapers MC series and loved them all.
Add To Goodreads
Purchase Links: Amazon  Barnes & Noble