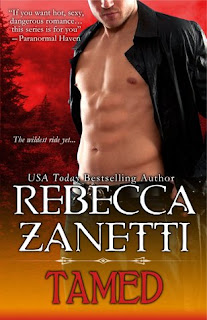 Caleb Donovan was never meant to be a prophet. At heart he's a conqueror, his appetites far more carnal than spiritual. He's not inclined to repress his passions and surrender to fate. After all, that's what cost him Lily—three centuries ago. She married another, because it was ordained. Now that he's in the same benighted calling—and forced into proximity with her—all the old desires are roaring back to life. . .

After widowhood and centuries of celibacy, Lily is eager to explore the wild side of life, except now she's vulnerable to another forced relationship, with an enemy. But this time she's determined to choose her own path. And if hot, furious Caleb comes charging to the rescue, it might just change both their destinies. . .

Love is about to start conquering. . .

Wanted more action and romance as I felt like there was more talk about getting ready for some big peace talk. It was repetitive and got bored easy. So far I have gobbled up all the books in the Dark Protector series even the novellas but sad to say this was easy to put down and pick back up.
Dage and Janie are a big part of the plot that I believe is leading up to her book Marked. I loved having them in this book.
Love this series and have even read all the novelllas because I can not get enough of Rebecca Zanetti amazing story telling and yummy heroes. Tamed was a good edition in the series. But for me I did not love it or hate it.

“The last time I felt this desperate for a woman, I was young—barely an adult.”
She hummed and ran a soft hand across his chest. “Lucky woman.”
He started, his heart beating hard enough she had to feel it.
“It was you, Lil. You’re the only woman I’ve ever wanted badly enough to burn.”