Lusting For Covers: Edge Of Danger by Katie Reus 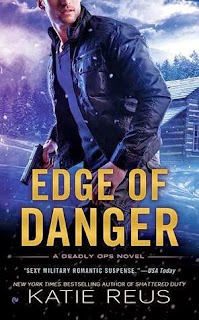 Synopsis
The new Deadly Ops novel from the New York Times bestselling author of Shattered Duty—in the series that delivers “fast-paced romantic suspense that will keep you on the edge of your seat!”*

When an assassin tries to kill undercover DEA agent Tucker Pankov the same week his boss is taken out, Tucker has good reason to be paranoid. And when other members of his elite team are not only targeted, but stripped of top-secret security clearance, Tucker has one shot at discovering who wants them dead—and why. So he kidnaps the only woman he thinks can save them.

Brilliant NSA analyst Karen Stafford doesn’t like being forced into anything, especially by someone she doesn’t trust. Yet after a hijacked US-owned drone starts attacking government installations resulting in mass casualties, Karen has to take Tucker’s side. Now, two unlikely allies must unite to prevent an escalating and unthinkable terrorist conspiracy. But as Tucker and Karen grow intimate, they realize the conspiracy runs deep, and their enemies are closer than anyone realized.

Thoughts:
What a delicious well put together Romantic Suspense cover.  Have yet to read this author or series.
Posted by JoLee @ Wickedly Delicious Book Blog
Email ThisBlogThis!Share to TwitterShare to FacebookShare to Pinterest
Labels: Lusting For Covers meme, Suspense Romance